Carry Yourselves With All Sense Of Dignity, Okowa’s Spokesperson Tells Journalists

Carry Yourselves With All Sense Of Dignity, Okowa’s Spokesperson Tells Journalists 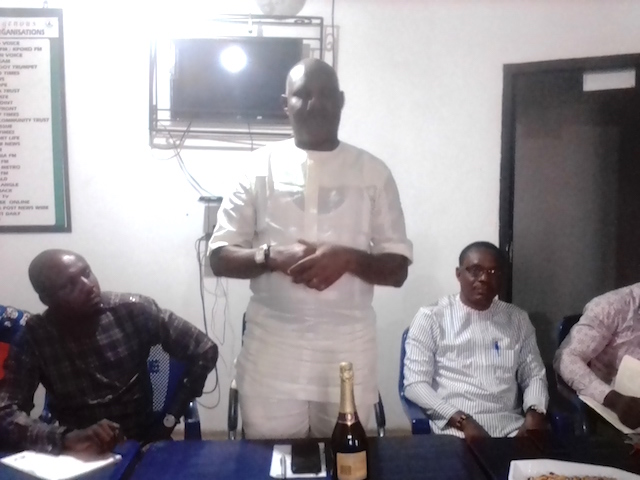 Journalists in Delta state have been urged to carry themselves with all sense of dignity while on duty.

The Chief Press Secretary (CPS), to the state governor, Mr. Olise Ifeajika, made the call when he paid a familiarization visit to members of the Indigenous Correspondents’ Chapel (ICC), of the Nigeria Union of Journalists (NUJ), Delta State Council.

He urged the Union to work out modalities to eliminate quacks from the profession.

He promised to put a stop to the indecent conduct of persons who disguise as Journalists thereby tarnishing the image of the profession before the public.

While soliciting for the support of member of the chapel, he urged them as grassroot reporters to keep up in the discharge of their duties while being equipped with relevant information of day-day happenings around them.

The Chief Press Secretary advised members of the fourrh estate of the realm to be modest in their dressing as they were role model that ought to be respected in the society.

He urged Journalist to stand out in the way they comport themselves so as to earn regards.

Earlier, the Vice Chairman of NUJ, Comrade Patrick Ochei, said that the chapel was one of the chapels in the council that had always adhered to the constitution of the Union with thorough bred leaders who have continued to synergize with the council in moving the Union forward.

Deacon Ochie while speaking on the position of the Chapel, said that they are closer to the grassroot and that they do more of developmental Journalism.

The number two Journalist while assuring the CPS of their support, lamented at rate at which persons in government patronizes blackmailers for publicity rather than professional Journalist, adding that if the Indigenous Journalist were given a chance they would correct all the wrongs in the reportorial.

The immediate past Chairman of the Chapel, Comrade Spence Idighri appealed that the governor appoint a Special Adviser on Community newspaper to help create more cordial relationship with the state government.

Presidency has been briefed on New Boko Haram video on Sharibu: Garuba Shehu