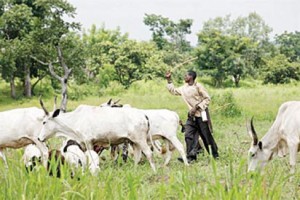 The Miyetti Allah Cattle Breeders Association of  Nigeria  (MACBAN) says there is no need to set up cattle colonies in the South East geopolitical zone.

Alhaji Sadiq Gidado, the Chairman of MACBAN in Anambra, said this on Friday at a news conference in Awka.

He said that the establishment of cattle colonies in the area was not necessary because of the harmonious relationship existing between members of the association and the residents.

He, however, underscored the need to strengthen the mutual understanding and synergy between MACBAN and the people in the zone.

Gidado bemoaned the incessant farmer-herdsman clashes in some parts of the country, saying that the two parties were coexisting peacefully in the South East zone.

a�?Cattle breeding in Anambra is different from what obtains in other states; here in Anambra; we are working in synergy with the security operatives, the indigenes and the state government through the Cattle Menace Control Committee.

a�?To me, anti-open grazing bill, cattle colonies and ranches are just political creations; these concepts are created by politicians to bring disharmony between farmers and herdsmen.

a�?In the South-East, the proposed cattle colonies cannot work; you cannot just take somebody’s land and give to another person to conduct his own business; it is not right.

a�?Here in the zone, it is virtually impossible to operate cattle colonies, as there is harmonious relationship existing between the herdsmen and the farmers.

a�?The cattle colonies they are talking about are already existing in the North,a�? he said.

Gidado, who is a member of the Cattle Menace Control Committee, commended the governors of the South-East states for being proactive by setting up the committee which had ensured peace.

He blamed some frictions recorded in the region on migrant cattle breeders, who were not members of MACBAN in the zone, saying that the association had put in place some measures to forestall future incidents.

a�?We thank the governors of the South-East states, especially the Anambra and Enugu state governors, who constituted these committees that are coordinating our activities.

a�?And if the people in the communities kill a Fulani man or his cow, you pay damages accordingly; we have a good structure that enables the effective management of our members,a�? Gidado said. (NAN)

21 thoughts on “Cattle colonies not practicable in South-East: MACBAN”