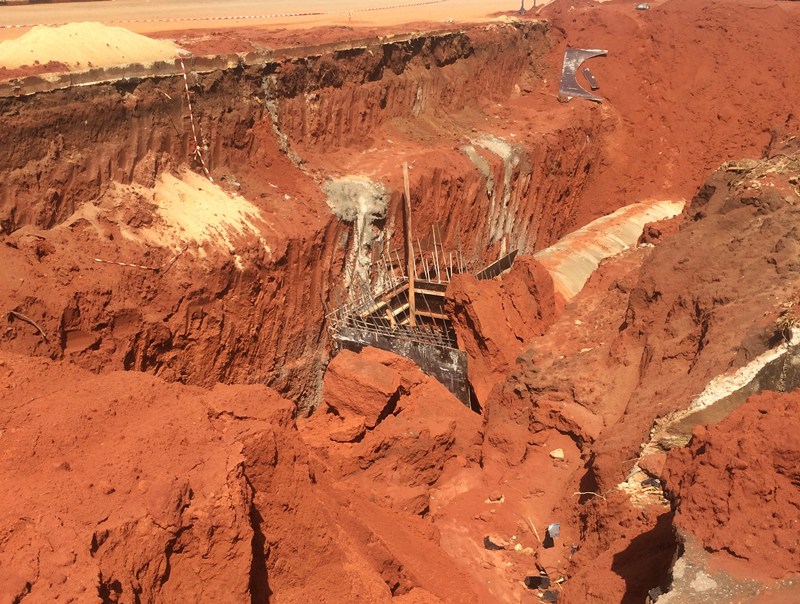 Trouble started Saturday 24, 2018, when the top layer of the drainage at the Federal Medical Centre (FMC), Nnebisi Road, Asaba, where Bassey and other workers were dismantling the boards of the manhole, carved in on him.

It was gathered that workers of the Chinese Construction firm, CCECC, are very concerned over the rising cases of accidents experienced on daily basis at various sites which include Jesus Saves, Direct Labour Agency (DLA) and other areas where the project is ongoing in the state capital.

Colleagues of Bassey, who spoke with our correspondent on ground of anonymity said a�?Mr. Bassey was with us when we went to dismantle the boards of the manhole at the FMC main gate when the top soil which was soft due to the heavy down pour the previous night, collapsed on him and by the time we got to his rescue, Bassey had lost his left lower leg completelya�? expressing fear if the incidence would not lead to the amputation of the leg from the knee region.

He disclosed that Mr Bassey, just joined the team few weeks ago and was skeptical about coming to work that fateful day.

Another worker who also pleaded anonymity said, a�?My brother who works as our carpenter, two days ago lost his foot to an excavator. It was just after the excavator was used to lift him and a generating plant from the depths of the drainage and he is now undergoing treatments by the companya�?, he explained.

The staff who also bemoaned the payments given to them, noted that it is nothing compared to the services they render to the company, a�?we work round the clock all week. Some of us are paid N13, 400 for a month while some lucky ones get as much as N25, 000, which is still very poor for the nature of our job and its possible hazardsa�?.

Meanwhile, investigations revealed that, since the commencement of the drainage project two months ago, both commercial transporters in the State capital and construction workers have had their fair shares of fatal accidents leading to amputations and even death.

Painstaking efforts made to reach medical personnel attending to the CCECC injured worker to ascertain his current state was abortive.

Also, attempts to speak with the Chinese Supervisor on ground to get the companya��s reactions on the growing numbers of work hazards and the alleged poor payments were unsuccessful as he could not speak English easily.

NECO Postpones Exam For 14 Days Due To Low Registration