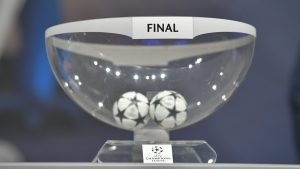 The 2018 Champions League semifinal draw is complete and it offered up two intriguing matchups: Bayern Munich vs. Real Madrid, and Liverpool vs. Roma.

While defeating AS Roma is no easy task, Jurgen Klopp ‘s Reds avoided Real Madrid and Bayern Munich in Friday’s semifinal draw. Yes, after Roma offered the epci comeback that saw them edge out highly-rated Barcelona FC, it will be folly writ large for any team to take them for granted.

At the Semi-final stage anything is possible. Besides, the dramatic display by Juventus against real Madrid, who were close to seeing off the Spanish giants, it is clear that every team at this stage is capable of surprises.

Bottomline: Roma is no pushover, knocking out Barcelona after winning a group with Chelsea and Atletico Madrid.

A potential 90-minute battle with Real Madrid or Bayern Munich for a sixth UCL title is drastically better than two legs, and don’t sleep on the idea that a final would occur after Liverpool has decided its Premier League standing.

There are varying degrees of experience in finals for these four historic clubs.

a�� Real Madrid is vying to increase its all-time high of titles to 13, and become the first club to win three-straight finals since Bayern Munich from 1973-76 (which came after Ajax won three in-a-row).

a�� Liverpool has played in seven European Cup finals, winning five, but last earned a finalist’s spot in a 2007 loss to AC Milan.

a�� Roma hasn’t played for a European Cup final since a 1984 home loss to Liverpool, its lone appearance in the final.

There are six final pairings possible amongst the semifinalists, and we’re power rankings the least to most appealing in this post.

6. Bayern Munich vs. Roma a�� If only because this is one of two matches, statistically speaking, that would give the highest probability of a blowout.

5. Real Madrid vs. Roma a�� Same as above but with Cristiano Ronaldo and Real angling for a third-straight title.

4. Real Madrid vs. Liverpool a�� Two teams whose defending can be suspect and attacks are often lightning in respective bottles.

3. Liverpool vs. Roma a�� Would be an all-underdog tie with a guaranteed first winner in more than a decade (or ever in the case of i Lupi). Plus, the idea of Mohamed Salah going up against his old mates is pretty juicy. American-owned clubs, to boot.

2. Bayern Munich vs. Liverpool a��  Jurgen Klopp gets a chance at UCL final revenge from the 2013 loss at Wembley.

8 thoughts on “Champions League semi-final: It is Bayern vs. Real Madrid, and Liverpool vs. Roma”