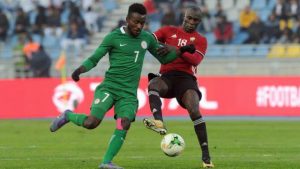 Sunday Faleye slammed home the only goal of the game as Nigeria beat Libya 1-0 in their second African Nations Championship clash in Tanger on Friday.

The win takes the home-based Super Eagles provisionally up to top spot in Group C on four points, having drawn 0-0 with Rwanda in their opener.

Libya remain in second on three points, with the Amavubi (one point) and pointless Equatorial Guinea to play in Fridaya��s later game.

As in their opener, Nigeria largely appeared devoid of creativity and ideas going forward, although they deserve credit for marshalling a Libyan attack that had appeared rampant at times against Equatorial Guinea in their opener.

The Eagles at least had the better of the tie, with the lively Faleye twice threatening a break through in the first half only to lose his footing on both occasions.

Emeka Ogbugh also built on a fairly ineffective showing in the first match with a bright display, although a move broke down at his feet in the 15th minute when his touch let him down, and a weak header was saved in the 54th minute after he was picked out by Faleyea��s fine cross.

Libyaa��s star man from their opener, Saleh Taher Saeid, was replaced before the hour mark after being thoroughly silenced by the Nigerian back line, with the North Africans devoid of the flair and confidence that characterised their opener.

Faleye had threatened to fade out of the game by the time he struck Nigeriaa��s first goal of the tournament in the 78th minute.

It was a delightful finish, from Osas Okoroa��s corner, as the ball fell just behind the Shooting Stars youngster, but he succeeded in hooking it into the corner of Mohamed Nashnusha��s goal, prompting delirious celebrations from the Super Eagles.

His strike shouldna��t disguise another lethargic and unconvincing display by Salisu Yusufa��s side, but it could at least give the Eagles confidence as they look to challenge for a maiden CHAN title.

Nigeria youngster Okeke linked with a move to Madrid