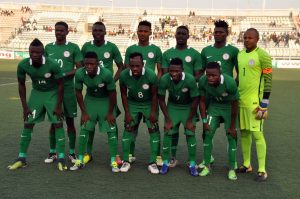 It was a grueling encounter, but the  home-based Super Eagles rose to the occasion to overcome  their Angolan counterparts to pick the semifinal ticket at the ongoing African Nations Championships.

The Eagles who went down 1-0 at the 55th minute of the encounter which had possession just slightly in favour of the Eagles  equalised at the extra during the extra minutes of the regulation time to force the game to go for additional 30 minutes. It was Eagles number shirt Anthony Okpotu who struck the saving grace, to save the Nigerians from quarter-final exit on Sunday night in Tangiers, Morroco.

With the game stretching into extra time, one of the new entrants, Gabriel Okechukwu, saved the day for Nigeria with a well-taken goal.

Despite fierce attempts by Angola to force the game to penalties, the coach Salisu Yusuf-tutored side held on as they became the third team to qualify for the semi-final where they will face Sudan.