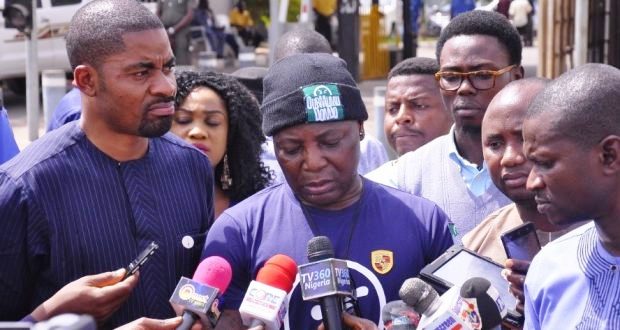 OurMumuDonDo Movement, a good governance advocacy group, has sacked Charles Oputa a.k.a Charlyboy as chief convener and trustee of the organisation.

The movement said the decision to remove him as leader was taken after an emergency general meeting of the group held on Friday in Abuja.

In a letter signed by Raphael Adebayo, the National Secretary of OurMumuDonDo, and addressed to Charlyboy, the group explained that the decision was predicated on the need to save the movement from public ridicule and unfortunate collapse following allegations of bribe-taking involving him and the spokesman of Buhari Campaign Organisation, Festus Keyamo (SAN).

The movement threatened to ask members of the public to cease further dealings and interface with Charlyboy on its behalf should he fail to comply with the directive to step down within 24hrs.

A copy of the letter obtained by Saturday Vanguard reads: “Following an Emergency General Meeting which held today, 22 March 2019, to address the slew of scandalous materials attributed to you, and your subsequent public avowal to have engaged in amoral pecuniary dealings with the spokesperson of General Muhammadu Buhari, Mr. Festus Keyamo, whom the OurMumuDonDo Movement has been publicly and completely critical of, the management of the OurMumuDonDo Movement, in a bid to save the movement from public ridicule, unfortunate collapse and also reinstate public confidence, has decided on the following:

“That your amoral and illicit dealing with the oppressors during a period when one of our fearless comrades, Deji Adeyanju, was banished to a hellish hole in Kano State for his fearless criticisms of the oppressors, represent a flagrant violation of the Foundation’s moral, ideological and constitutional focus.

“That your unscrupulous flaw has not only affected the credibility of the OurMumuDonDo Movement but also the myriads of conscientious and genuine Activists, Right Groups and Civil Society Groups in Nigeria.

“That we have come to the doleful conclusion that you step aside as a Trustee of the Foundation and as the Convener of the OurMumuDonDo Movement within 24hours starting from the moment you receive this letter today, 22 March 2019.

“Failure to comply with this recommendation shall leave us with no other option but to ask members of the public to cease any further dealing and interface with you, and we shall not hesitate to take all necessary lawful steps to ventilate our remonstrance and ensure that the credibility of this Foundation is protected.

“We must mention that this decision is not borne out of any personal vendetta but rather a fervent commitment to salvage the OurMumuDonDo Movement from public ridicule and imminent collapse.”

Charlyboy told Roots TV that Keyamo paid him money in “nine figures” in the run-up to the country’s presidential election in February.

Charlyboy, however, claimed that the money was a payment for the right to use a song he recently composed.

“When Keyamo came to discuss Deji’s matter, he heard my new song that I was working on…where I was dissing Atiku,” Charlyboy said.

“Of course, he paid for it. And they paid heavy.”

When asked how much the money was, Charlyboy Boy admitted that the money was in “nine figures” mentioning no specific amount.

The song, ‘Another Guy Man,’ was posted to YouTube on January 25. It has 6, 687 views on Charlyboy’s channel as at Friday morning.

In it, he criticised both People’s Democratic Party and All Progressives Congress, with more scathing criticisms reserved for PDP’s Atiku Abubakar while President Buhari was left out totally.

Keyamo has denied the allegation, stressing that it was unimaginable that he would pay for a song that insulted the All Progressives Congress, APC, the party that sponsored Buhari for the 2019 presidential election.