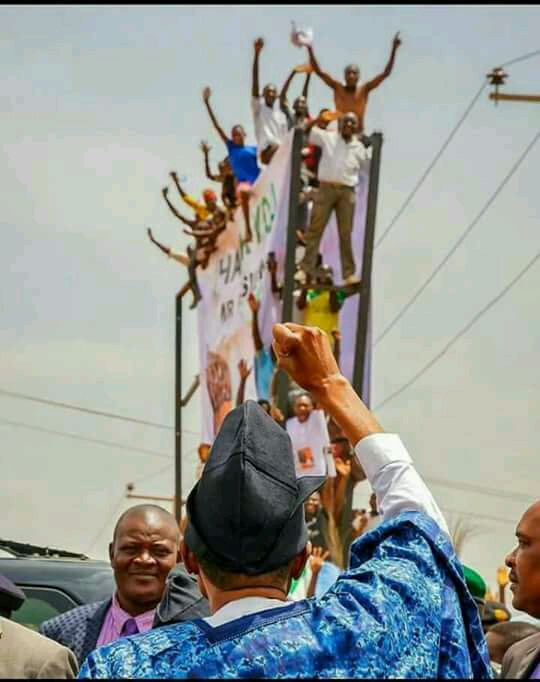 Sixty-five million Nigerians are illiterates, according to UNESCO. Nevertheless, the year has been moderately fine for Nigeria, having fared favorably in enviable awards, such as ranking big as the world’s 148th Least Corrupt Country, and topping the list of African countries who live and bath in alcohol. Indeed, a giant of Africa! Nigeria has also recorded outstanding performances in harboring unschooled killer-herdsmen who invade the farms of communities, and destroy lives when resisted, just so their beloved cattle can eat. The most remarkable, is Nigeria’s consistent history of electing fairly educated presidents.

As election year fast approaches, one can hastily predict the outcome. Traditionally, two out of five elected presidents in Nigeria are satisfactorily schooled and literate. With an adult literacy rate of 59.6 percent, close to half of Nigeria’s population are grossly illiterate. Interestingly, the illiterate population make the greater part of the country’s voting strength, and would rather be swayed by popular candidates who lobby and purchase their votes with gallons of palm oil, customized bags of rice, two thousand Naira ($5) or less. The educated population are split into two categories. One half, prioritize political party affiliation far above the prospects of tangible development, while the others are heavily partisan on social media and public hangouts, but record a low voter turnout.

The Nigerian economy under democratic regimes haven’t been known to be a flourishing one. This is understandably so, as non-professionals seem to be the overwhelming choice of the people for president. The few seasoned technocrats are either overlooked for their perceived incompetence in amassing grassroots support, or branded ‘too elitist’ for the rigors of “Nigerian Politics.” The favored political slots available to the Nigerian intellectual class at the federal level, are Ministerial/Ambassadorial positions, or the Vice Presidency at best. As the Nigerian ruling party (APC) seeks reelection at the forthcoming polls, Nigerians are once again presented with the option of President Muhammadu Buhari, whose completion of his secondary education is at present the subject of controversy, while of course, his running matea��a professor of law and current Vice President Yemi Osinbajo, is overlooked for the presidency.

A cross-section of Nigerian voters, find more interest in the ethnic and tribal routes of candidates, than their academic qualifications or corporate track records. The Nigerian electorate are also keen on religious preferences. The prospects of a Muslim candidate running for office alongside a competent Muslim running mate is often dead on arrival. One needs no rocket science to ascend to the presidency in Nigeria. A popular individual of considerable advancement in agea��who’s an ‘anointed’ indigene of the ethnic or geo-political zone to be favored based on zoning calculations, equipped with propaganda to demonize the current government, massive funds to throw around, as well as good dance steps to showcase at campaign venues is ripe for the job!

The worrisome rate of illiteracy in Northern Nigeria is alleged to be the root cause of terrorism, religious hostility and widespread extremism witnessed in the region. One in every two Christians in the northern part of Nigeria is likely to be physically assaulted over a religious altercation. In some other parts of the country, fashionable women with a loud sense of style are fast becoming endangered species. A lady thought to be indecently dressed is at risk of being shamed, or publicly stripped by mobs. Pickpockets and other roadside thieves aren’t finding their career path easy. One caught in robbery would be lucky not to be lynched to death or publicly burned alive.

The Nigeria Police has grown quite a fancy reputation for itself as an internationally recognised violator of human rights. The recruitment of schooled officers into the force hasn’t done much good either. Nigerians were recently taken aback by a viral footage of some suspected kidnappers, having their testicles shot and brutally blown up by officers of the Special Anti-Robbery Squad (SARS) a unit in the Nigeria Police, without legal trial or prosecution.

An enlightened population is synonymous to a developed nation. And quality leadership is the product of an informed electorate. To achieve progress in social development, adult literacy must be given as much attention as building the economy, fighting insurgency and creating employment. If the excessive cost of governance in Nigeria is reduced to a minimum, free adult literacy centres should be established in every local council to aid the reduction of illiteracy through intensive public enlightenment. The fight against illiteracy shouldn’t be won only on the pages of newspapers. It should reflect on the streets of Nigeria, where what’s left of literacy is its charred remains.

Bio: Nimi Princewill is a writer and social reformer.

Buhari is a success, not problem of Nigeria

Femi Fani-Kayode, Nnamdi Kanu, IPOB and other Victims of Oppression

Nigeria At 57: An Entity of Tribalistic Nepotism and Democratic Falsism

122 thoughts on “Charred Remains of Literacy in Nigeria”