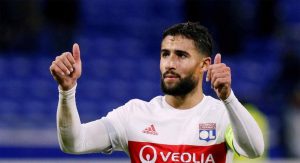 Chelsea have reportedly accelerated their interest in signing Lyon midfielder Nabil Fekir. A deal could be struck before Thursday’s deadline.

Fekir was previously thought to be heading to Liverpool prior to the World Cup. That deal collapsed at the eleventh hour, with the Frenchman remaining at Lyon.

Having already shown willingness to depart the Ligue 1 giants, Fekir could still be hoping that he’s able to seal a move away from Lyon before the end of the summer.

Chelsea could provide him with an opportunity to do so, according to  France Football .

The French publication claim that Chelsea’s interest in signing Fekir is strong, with the Blues still hoping to sign him before the transfer window comes to a close.

France Football note that while Liverpool are unlikely to provide us with competition, we are against the clock if we want to get the deal over the line before Thursday.

It seems unlikely that we would spend such a hefty amount on Fekir this late in the window, but after yesterday’s performance vs. Manchester City, who knows…