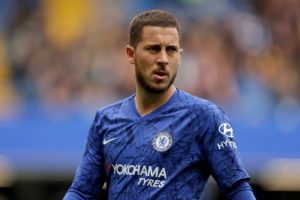 Chelsea have finally agreed to allow Eden Hazard to join Real Madrid after agreeing a club record £115million deal for the Belgian winger. Hazard, 28, has one year left on his deal at Stamford Bridge and made it clear to Chelsea’s board in April that he was keen on a move to the Bernabeu. The Belgian wanted to leave Chelsea in 2018 but was convinced to stay at the club by Maurizio Sarri, who promised to let Hazard go 12 months later should he wish to do so. A two-window transfer ban handed to the club threatened to end Hazard’s dream of joining Madrid with Chelsea given some consideration to the prospect of keeping him for a year before letting him leave on a free transfer.

However, the Sun claim Roman Abramovich has intervened to ensure that Hazard gets his move to the Bernabeu and Chelsea have agreed a £115m deal with the La Liga giants. That dwarfs Madrid’s previous club record move for Gareth Bale after they paid £87m for the Welshman in 2013. The report claims Chelsea will receive £100m up front for Hazard with a further £15m in achievable add-ons. Hazard is set to earn around £400,000-a-week at the Bernabeu, which tops the £300,000-a-week offer he had on the table from Chelsea.

Hazard’s final appearance for Chelsea will be in the Europa League final (Picture: Getty) Real Madrid president Florentino Perez has made no secret of his desire to sign Hazard and he’s suggested the deal will be announced soon. ‘We have been trying to make Hazard a Real Madrid player for several years,’ said Perez. ‘We are working on a project to make people dream again, where we recover our hunger and ambition. I have already lived through this stage before. ‘I have a dream that Hazard will arrive this year. Let’s make a good team this year. ‘I am very interested in him coming to Real Madrid and I am very hopeful that he will come this year. He’s one of the great footballers. ‘Last year we wanted him, but this year he only has one year left on his contract and it is easier.