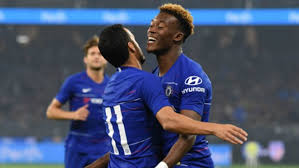 There is exclusive breaking news from Goal’s Chelsea correspondent, Nizaar Kinsella, who leads with Chelsea offering Callum Hudson-Odoi a new five-year contract, which apparently includes a promotion to the first-team as well.

I would argue that the second part is actually far more interesting and significant, and it’s also backed by not only his performance on Monday night, but the shirt number he was wearing.

Hudson-Odoi has two years left on his first professional deal, signed last summer. These, by rule, cannot be longer than three years, so Chelsea were always going to look to extend it to the full five years at the earliest opportunity. As is seemingly the case with most of our contract negotiations, not to mention a fair amount of youngsters starting to be wary of the loan dance, it’s not going to be an easy deal to get done.

Chelsea Youth @chelseayouth
Pre-season is pre-season but it’s going to be an interesting few months for Hudson-Odoi. His contract is up in 2020 and will not be an easy one to get done; with interest from just about everyone else, how 2018-19 starts for him will set the table for future negotiations.

Twitter Ads info and privacy
And that’s where the first-team slot comes into play, as not only good intention and a well-earned promise, but as a negotiating tactic.

Hudson-Odoi may be only 17, but he was perhaps Chelsea’s most impressive player against Perth, which is still significant even if we adjust for it being Perth, in a pre-season friendly, with half the squad including most of the best players missing. But Hudson-Odoi did not look out of place in any of his 4 appearances last season either, and is clearly ready for senior football. It will be tricky to find him enough playing time next season, but this is one place where the Europa League could become very useful suddenly. And if the decision that has to be made is between sending him on an ultimately disillusioning loan or keeping him with the team, learning the new system, and getting semi-regular minutes, the choice is clear. (There is risk with either choice, but that’s unavoidable.)

Further evidence to all this was given by the simple fact of Hudson-Odoi’s shirt number against Perth. Last season, he wore shirt No.70, a clear indication of a youth player temporarily moved up to play with the first-team. On Monday, he wore shirt No.20. While the shirt’s recent history is not a great omen (both Josh McEachran and Matt Miazga failed their ultimately very brief first-team auditions), and this hardly an exact science, it’s still a very promising development in the highly promising future of young Callum Hudson-Odoi.

Andrew Turmer @AndrewTurmer
·  23 Jul
Replying to @chelseayouth
CHO given the 20 shirt. Has that been officially announced for the season? A first team number for a first team player… (it’s the hope that kills you) </blockquote>

Chelsea Youth @chelseayouth
Nothing announced yet but it’s usually a solid indicator.

How Super Eagles rated Vs England

Two out of three won’t do for Rocket

99 thoughts on “Chelsea assign shirt number to teenager Hudson-Odoi , set to promote him to Chelsea first-team”