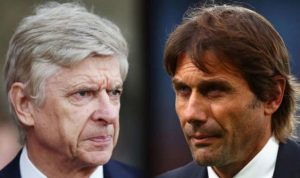 The Italian is currently under mounting pressure at Stamford Bridge as the Blues sit precariously in fourth place in the Premier League table.

And Gunners supporters have been calling for the head of their boss for some time after a succession of fourth place finishes.

There is strong speculation that Wenger could walk at the end of the season but there is no clear evidence of who would take over.

Former Arsenal midfielder Merson thinks it would be a good move if the north London outfit could recruit Conte, if he was to leave Chelsea

Report: Neymar to stay with PSG after negotiations end with Barcelona