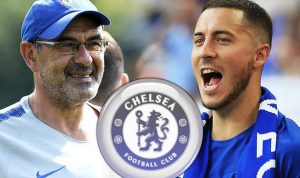 CHELSEA boss Maurizio Sarri is ready to make Eden Hazard his captain in a bid to keep the Belgian star at Stamford Bridge.

Hazard  led Belgium to the World Cup semi-finals this summer, and is a £180million target for Real Madrid.

But  Chelsea  are determined not to sell and feel that handing him the captaincy may be the key to persuading the 27-year-old to stay and sign the new contract he has been offered.

Sarri, who has only been working with his squad for just over a week since taking over, has not yet made the final decision but Hazard, who is also Belgium’s skipper, is at the top of his list, ahead of Spanish defender Cesar Azpilicueta and midfielder Cesc Fabregas.

Chelsea have been told by Juventus they will have to pay £45million for centre-back Daniele Rugani.

An opening offer of around £40m was rejected in discussions between Granovskaia and Juve sporting director Fabio Paratici in Italy on Thursday, but  a deal could be concluded this weekend .

Rugani’s agent David Torchia said: “Chelsea really like Rugani and have made an important offer. Juve are aware of the interest but for now they don’t want to sell the player.

“But we know everything has a price. Rugani is a defender that would make Chelsea’s manager happy and it would be a good investment for them. Rugani wants to play more games.”

Chelsea also want £58m-rated Juventus striker Gonzalo Higuain , but want to get the Rugani deal sealed first – and to complicate matters AC Milan are also in for the Argentine.

The arrival of Cristiano Ronaldo in Turin has led to Juve rethinking their options, with general manager Beppe Marotta saying: “He is still an important player for us, but now we obviously have greater competition [up front].

“He is a professional and we are evaluating his future together with the people who represent him.”

Chelsea are also close to a deal for Brazil winger Bernard, 25, who is a free agent after leaving Shakhtar Donetsk, while Valencia are interested in Chelsea striker Michy Batshuayi.