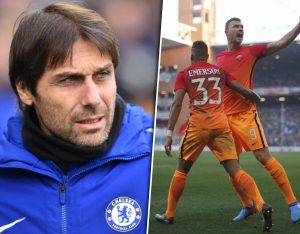 Chelsea have been linked with a host of names this past week in the hope of bolstering their attacking options.

Michy Batshuayi has not been able to convince Conte over the past 18 months and has struggled to make the most of his first team opportunities.

Andy Carroll, Peter Crouch and Ashley Barnes have all been touted as potential targets for the Blues.

But Dzeko is seemingly their No 1 target with Roma willing to listen offers.

And they have reportedly reached a breakthrough in talks with the Serie A giants.

That’s according to  The Sun , who claim the two clubs have been locked in negotiations this weekend and have agreed a a�?basic feea�? of A?28m.

However, the report goes on to say the Italian club are holding out for an extra A?5m in additional payments.

Roma’s director of football Monchi hinted Dzeko had played his last game for the club prior to their match against Inter Milan yesterday.

GETTY
Chelsea are also on the verge of signing Emerson Palmieri a�?Whatever will be will be. I work every day to have players suitable to replace our players, my job is always to strengthen my club.

It is also suggested Chelsea are close to completing a deal for fellow Roma star Emerson Palmieri with Conte keen to offer some cover to Marcos Alonso.

Samuel Kalu a lock for Super Eagles call up