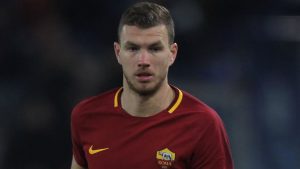 Chelsea are edging closer to signing Roma duo Edin Dzeko and Emerson Palmieri, according to Sky in Italy.

Sky Italia understands Chelsea are willing to pay a��50m plus a��10m in bonuses to land the two players, with former Manchester City striker Dzeko ready to make a return to the Premier League with the Blues.

Chelsea are also open to letting Michy Batshuayi go on loan to the Serie A side to help facilitate the deal.

Sky Sports News understands Chelsea are the only club Dzeko is prepared to leave Roma for.

Dzeko, 31, has scored 12 goals for Roma this season, including a double against Chelsea at Stamford Bridge in the Champions League in their 3-3 draw in October.

Sky Sports News reported earlier this week that  Palmieri is keen on the move , and wants to work with Conte, with Chelsea his preferred destination.

Roma are still evaluating other potential outgoings and signings with no agreement in place with Chelsea yet over Dzeko and Palmieri.

Sarri to Moses, Drinkwater: your styles of play do not suit my kind of football