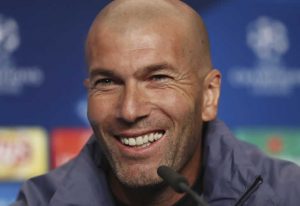 Chelsea FC will look to appoint Zinedine Zidane as their new manager after he left Real Madrid this week, according to reports in the British media.

The Daily Mirror is reporting that the Blues will ask the Real Madrid legend if he would consider an immediate return to management after he quit on Thursday.

Zidane opted to leave Real Madrid after guiding the Spanish side to their third straight Champions League title in what was something of a surprise decision by the former France international.

Chelsea FC are being linked with a host of managerial candidates this summer as Antonio Conte’s future at the west London club remains up in the air.

According to the same story, Chelsea FC have got “cold feet” about appointing Maurizio Sarri as their new boss due to his controversial past.

Zidane is now understood to be one of Chelsea FC’s top candidates for the job, but if he rules himself out of the running, the Blues will turn to fellow Frenchman Laurent Blanc, according to the same report.

Chelsea FC endured something of a disappointing season last term when they finished in fifth place in the Premier League table and missed out on Champions League qualification, before winning the FA Cup.