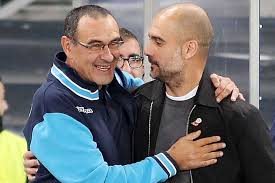 The Blues are under some pressure after losing two of their last three league games, as they welcome the champions to west London

Chelsea seem to be in a three way battle for the top four places to qualify for next season’s Champions League, as back-to-back away defeats halt their 18 game unbeaten run.

Maurizio Sarri’s side lost 2-1 to Wolves in midweek with Tottenham having leapfrogged them into third, but they retain fourth place on goal difference ahead of Arsenal.

Pep Guardiola’s Manchester City are unbeaten in the league and are 10 points clear of Chelsea, as they look invincible and continue to blow teams away in the Premier League. They will feel confident about overcoming Chelsea on Saturday, despite travelling to Stamford Bridge for the match.

Chelsea have a fairly clean bill of health despite Maurizio Sarri saying that Marcos Alonso and Mateo Kovacic had been struggling for fitness after the recent home win over Fulham.

Eden Hazard looks fully recovered after being rested against PAOK, but there are doubts over Victor Moses and Ross Barkley too, who have both recently missed games due to sustaining knocks.

Neither Chelsea or Manchester City have any players out through suspension ahead of Saturday’s clash, while there are also no players in danger of bans for future games should they pick up yellow cards. N’Golo Kante, Alvaro Morata and Antonio Rudiger have the most bookings this season for the Blues, with three apiece.

Sarri’s rotation is set to continue but he has five players who have played in every league game so far this season, suggesting that these are the players that he thinks he can’t afford to rest. They are Kepa Arrizabalaga, Cesar Azpilicueta, Antonio Rudiger, Marcos Alonso and N’Golo Kante.

Twelve games in 40 days signals a busy winter schedule for Chelsea and many other teams across English football. Manchester City are the champions and are top of the league so their power may need to be countered with specific changes to shackle them and stop their free-scoring ways.

Manchester City are without a host of players but still retain favourite status ahead of the match. Influential midfielder Kevin De Bruyne continues to miss out due to a knee injury and isn’t thought to be ready to return.

Sergio Aguero is a doubt after missing his side’s last two matches with a muscle injury. Benjamin Mendy has a long term knee injury that is expected to keep him out until February, while Oleksandr Zinchenko is a doubt with a foot injury.

Claudio Bravo sustained a long term achilles injury in pre-season, leading to the loan recall of Arijanet Muric from NAC Breda to act as back up to City’s No.1 goalkeeper Ederson.