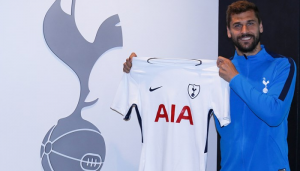 Chelsea are reportedly ready to talk to Tottenham over a move for Fernando Llorente. Antonio Conte was determined to bring Llorente to Stamford Bridge in the summer transfer window but a phone call from Mauricio Pochettino on deadline day convinced the striker to join Spurs.

The Italian is looking to bring in support for Alvaro Morata this January and it’s understood the Blues have contacted West Ham over a move for Andy Carroll. MORE: FOOTBALL Deal close: Alexis Sanchez a�?likelya�� to join Man Utd in next 24 hours, confirms Wenger Staying put?

Henrikh Mkhitaryan posts cryptic update after Arsenal talks Tempting fate? Man United fan gets Alexis Sancheza��s No.7 shirt ahead of transfer According to The Independent, though, Conte has not given up hope of landing Llorente and is urging Chelsea to go back in for the striker.

Chelsea’s manager believes Llorente has the experience to help Morata  through the difficult period he is experiencing. Antonio Conte was desperate to land Fernando Llorente in the summer (Picture: Getty) Alvaro Morata has struggled in recent weeks (Picture: Getty) Morata, who had a barnstorming start to life at Chelsea, is without a goal in his last six appearances for the Premier League champions.

Llorente mentored Morata during their time together at Juventus and the pair scored a combined total of 24 goals in the 2014/15 campaign. Asked why he snubbed Chelsea in the summer, Llorente previously explained: ‘Conte signed me at Juve and wanted me to join him at Chelsea. ‘He had tried to sign me in January as well. Chelsea, however, failed to reach an agreement with Swansea and Tottenham were much quicker than the Blues.

‘I knew Pochettino. I knew he worked well at Espanyol and Southampton. He changed everything at Tottenham in three years. He is such a great manager, the project is amazing here. I am really happy to have joined Tottenham.’