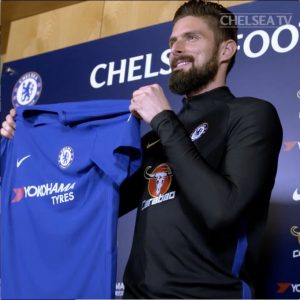 Chelsea have completed the signing of Olivier Giroud from Arsenal for a reported A?16.25 million on an 18-month contract.

France international Giroud becomes the cluba��s third signing of the window, joining midfielder Ross Barkley and left-back Emerson Palmieri at Stamford Bridge, and will wear the No. 18 shirt.

His deadline day transfer paved the way for striker Michy Batshuayi to join Borussia Dortmund on loan for the rest of the season, after BVBa��s Pierre-Emerick Aubameyang joined Arsenal earlier on deadline day for A?56m.

Upon signing, Giroud told Chelseaa��s official website: a�?Chelsea is one of the biggest teams in the Premier League. They have won maybe the most trophies in the last six or seven years. Ita��s a massive club and I am proud to sign for Chelsea, and Ia��m looking forward to playing.a�?

And in a later post on his official Twitter account, he added: a�?I spent five and a half amazing years within the Arsenal family. This beautiful story ends today. Thank you for your warm welcome. I would like to especially thank the fans for their unconditional support upon my arrival.a�?

Giroud is the first player to transfer directly from Arsenal to Chelsea since Ashley Colea��s controversial move across London in August 2006.

A A?12m signing from Montpellier in the summer of 2012, he scored 105 goals in 253 appearances for Arsenal in all competitions, winning three FA Cups and three Community Shields.

Manager Arsene Wenger included Giroud in the squad for Tuesdaya��s defeat at Swansea City despite his imminent departure, bringing him on in the second half.

a�?Ita��s a tribute to his professionalism,a�? Wenger said. a�?Hea��s given great service to the club, never let us down on the performance front and saved us many times.a�?

Giroud, Emerson and Barkley will all be eligible to be named in the Chelsea squad for the knockout stages of the Champions League, with Antonio Contea��s team drawn to play Barcelona in the round of 16.

Italian Doctor Frowns At Starting Serie A In May