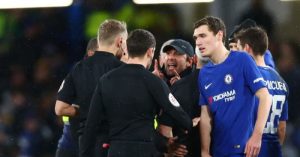 Here are three points from Chelseaa��s penalty shootout win over Norwich City in the FA Cup third round on Wednesday at Stamford Bridge.

1. Batshuayi finally scores, Chelsea survive
Until the final minute of regulation in this classic FA Cup third-round tie, Michy Batshuayi was set to be Chelseaa��s hero for the first time since wrapping up the Premier League title against West Brom at the Hawthorns in May. In the end, he shared the limelight with Willy Caballero and Eden Hazard, despite Norwich Citya��s pushing the reigning Premier League champions to the brink.

Batshuayi ended the cluba��s 351-minute goal drought in the 55th minute, diverting Kenedya��s low cross into the roof of Angus Gunna��s net. It was a startlingly simple move, given the extent of the home teama��s labours until that point.

Danny Drinkwater went closest in a drab opening half, with Gunn tipping his brilliant swerving shot from 30 yards onto the crossbar.

The Bluesa�� best moment also helped explain many of their worst; Norwicha��s organisation too often forced hopeful attempts from long range. At the other end, Nelson Oliveira clipped the bar with an opportunistic strike after Batshuayi gifted him the ball 25 yards out.

The biggest cheer until Batshuayi had scored greeted the half-time announcement that normal service had resumed from Fulham Broadway Underground station. Travel chaos had delayed kickoff by 15 minutes.

After his goal, the match opened up, and not entirely to Contea��s liking. Shortly after nerveless 17-year-old Ethan Ampadu cleared Josh Murphya��s shot off the line, Caballero was forced into a desperate save from James Maddison when Drinkwater had his pocket picked by Harrison Reed.

Conte introduced Alvaro Morata to try to put the game beyond doubt and Andreas Christensen and Na��Golo Kante in an attempt to shore things up at the back, but neither had the intended effect.

Norwich kept their belief and gained momentum until the 94th minute, when Jamal Lewis glanced Timm Klosea��s inviting cross in off the far post to condemn Chelsea to extra time at the end of an unwanted replay.

Conte made use of his fourth allowed substitute, introducing Hazard for Drinkwater on what was supposed to be a night of rest for the Belgian. Gunn produced another superb save to foil Willian and twice denied Morata as frustration turned to anxiety at Stamford Bridge.

Frustration soon became anger. Moments after showing Pedro a second yellow card for a late tackle on Wes Hoolahan, referee Graham Scott booked Morata twice in quick succession after the Spaniard protested being judged to have dived in the penalty area.

Deprived of two of their preferred takers, Chelsea remarkably entered the shootout feeling like underdogs, but the experience of their nine remaining men finally told. Caballero saved impressively from Oliveira, while Willian, David Luiz, Cesar Azpilicueta and Kante were perfect.

It was left to Hazard to settle it, and he did so nervelessly. Chelsea are still alive in all competitions, but only just.

Mike Hewitt/Getty Images
2. Chelseaa��s scoring problems are systemic
Until now, Conte has been content to dismiss Chelseaa��s recent struggles in front of goal as mere misfortune, insisting that their luck will change without the need to resort to any radical tactical rethink.

Ita��s true that among the 54 failed attempts Chelsea had against Norwich City, Arsenal and Leicester City were some great chances, with Morata particularly culpable. But as the drought has lengthened and confidence has drained away, performances have provided less in the way of reassurance.

Nor is it simply a problem of personnel; Conte made nine changes for the visit of Norwich and has used every fit senior player at his disposal since the turn of the year in a variety of lineups.

Chelsea are no longer creating as many of the kind of chances that require bad luck to miss. Their opponents increasingly know how and where to press them in order to disrupt their carefully rehearsed passing combinations and where to position themselves defensively to frustrate their attacking runners.

Such a game plan enabled Leicester to dominate at Stamford Bridge until Ben Chilwella��s dismissal and then hold out comfortably when reduced to 10 men. Norwich were understandably not so imposing but still ensured that Chelseaa��s best chances in a frustrating first half came from long shots and set pieces.

Batshuayia��s goal was well worked but also required a mental lapse from Norwich that is rare among Premier League defences. A new approach is required, one more sophisticated than simply plonking West Hama��s fragile battering ram Andy Carroll up front.

The 3-4-3 formation that won the Premier League title has lost its element of surprise, and 3-5-2 is not enough of a departure. One of Contea��s best qualities is his willingness to experiment with different systems, and he might need to reinvent Chelsea again if they are to rediscover their collective attacking spark.

A frantic summer that saw 16 players depart and 12 arrive ensured that Farkea��s ideas were slow to take hold, but there have been plenty of signs in both matches against Chelsea that Norwich are heading in a positive direction.

Farke told  the Guardian  earlier this season that he aspires to be more of a possession-based coach in the mould of Pep Guardiola or Thomas Tuchel than a counter-presser such as Jurgen Klopp, but he is certainly not what Jose Mourinho would sneeringly dismiss as a a�?fundamentalist

At Carrow Road and at Stamford Bridge, his Norwich side worked smart as well as hard, picking their moments to press and pushing forward in numbers only when the numbers favoured them. It was an approach that fell agonisingly short of a famous upset but did force the reigning Premier League champions all the way to the final bell of an undesired replay.

The sale of Alex Pritchard to Huddersfield will certainly be felt, but Norwich are only six points off a Championship playoff place and, on this evidence, still have more than enough about them to mount a charge in the second half of the season. In Farke, they might just have the coach, too.

How Atletico Madrid Send Liverpool Out Of Champions League