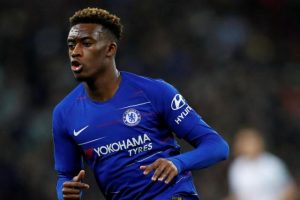 Chelsea will report Bayern Munich to FIFA if there is evidence they have ‘tapped up’ Callum Hudson-Odoi.

The German giants are vigorously pursuing Hudson Odoi, 18, who is one of the brightest talents to emerge from Chelsea – and England – in recent years.

Hudson-Odoi is reportedly not going to sign a new deal at Chelsea, with his current one running out at the end of next week, and Bayern Munich have made multiple bids for him.

The latest one was £35m and Chelsea are reluctant to sell, with ESPN reporting that they are prepared to report Bayern if there is evidence they have behaved illegally in the pursuit of the winger.

Tapping up is difficult to prove and the club will not make a complaint unless they are certain the evidence is there.

Bayern have been very public about their desire to sign Hudson-Odoi in recent weeks, sporting director Hasan Salihamidzic said they ‘absolutely want to sign’ him earlier this week.

Comments like that would fall foul of Premier League rules, but not FIFA regulations.

If Hudson-Odoi remains a Chelsea player beyond the January transfer window but refuses to sign a new deal, his value will decrease come the summer and the club are wary of that.

But they want to keep Hudson-Odoi and believe he could be the first academy player to cement his place in the side since John Terry emerged 19 years ago.