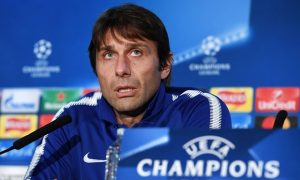 The French midfielder has found himself starting on the bench for Manchester United recently, with the Blues boss hoping hea��ll again be left out

Antonio Conte has talked up Paul Pogbaa��s qualities and insisted that it would be better for Chelsea if Jose Mourinho leaves him out of his starting XI on Sunday.

The Blues travel to Old Trafford for a crucial fixture in the race to finish in the top four, with Pogba one of the main talking points ahead of the game having been in and out of the side in recent times.

After being withdrawn after 63 minutes of Uniteda��s 2-0 defeat to Tottenham in January, Pogba was then dropped to the bench against Huddersfield before again being taken off midway through the second half of the defeat to Newcastle.

He was then missing from the FA Cup win over Huddersfield due to illness and surprisingly started on the bench for the Champions League last-16 clash with Sevilla on Wednesday.

Scott McTominay has been one to benefit from Pogbaa��s absence from the team but Conte insists he would be happy if Mourinho continues to leave out the former Juventus man.

And when asked about the Frenchman potentially being on the bench again this weekend, the Blues boss said: a�?We are talking about a top player, about a fantastic player.

a�?My expectation is to see him on the pitch, if he stays out [of the XI] it will be better.

a�?As I said before, we are talking about a top player. Every coach has to find the right way to manage him. But I think that Pogba is showing at United that he is a top player.a�?

When asked if he was surprised Pogba had been left out recently, Conte added: a�?I must be honest: my focus is only on Chelsea. Ia��m not interested on what happens with the other teams.a�?

Chelsea 'offered' one of the best defenders in the world

FIFA threatens to bar Nigeria from the World Cup tournament

415 thoughts on “Chelsea would be happy to see Pogba start from the bench for United: Conte”