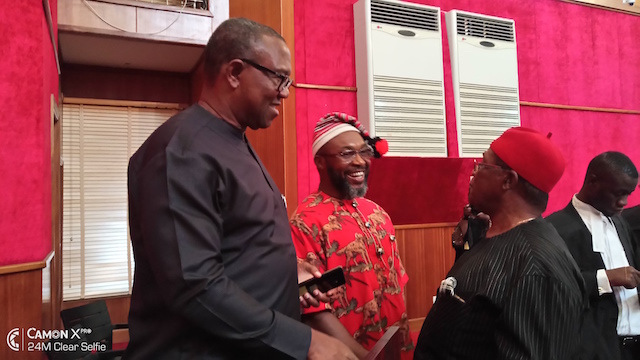 The former Corps Marshal, Federal Road Safety Commission (FRSC) and Minister of the Federal Republic of Nigeria, Chief Osita Chidoka, was Friday called to the dock to testify as the star witness of the PDP at the presidential election tribunal.

Chidoka who was the national collation agent and the head of PDP situation room during the 2019 election, calmly and confidently testified and answered questions under cross examination.

It is important to note that all the documents and issues raised in the PDP petition were presented to the court through affidavits deposed to by Osita Chidoka as prosecution witness number one. Therefore his presence in court today came with a lot of tension and expectations both from defense and prosecution sides, since the case is based on his affidavits, defense lawyers were eager to puncture his testimony.

The three key issues namely; INEC server, President Buhari’s certificate and electoral malpractices as alleged by the PDP candidate Alhaji Atiku Abubakar all came into focus today as Chidoka adopted his affidavits, and the prosecution asked him to identify and adopt other key documents that had been tendered in the election tribunal.

Upon cross examination Yunus Usman SAN, the INEC counsel queried Chidoka on how he could attest that Atiku is from Nigeria and was born in 1946, when he (Chidoka) was not biologically present then but was born in 1971.

Responding Chidoka said “I can also attest that Nigeria got her independence in 1960 though I was not also biologically present then.” (Laughter in court)

Asked if he has seen the INEC server. Chidoka said he had not seen any INEC server as he was not a staff of INEC

The witness also told the tribunal that the INEC Chairman, Mahmoud Yakubu had consistently said at various times that there would be electronic transmission of results.

Responding to questions from Yakubu Maikyau, counsel to the APC, Chidoka revealed that the INEC Chairman had told him and other stakeholders during meetings prior to the 2019 general elections that the election will be conducted as if the new electoral act had been amended.

Chidoka under cross examination wondered why the commission spent a whooping N27bn on Information Communication Technology, ICT, without electronic transmission of election results which is one of the capabilities they acquired.

Efforts by the respondent’s counsel to weaken Chidoka’s testimony meet a brick wall as he answered their questions effortlessly and confidently.

Asked if he was aware that President Buhari addressed Nigerians in English when he was military head of state in 1983. Chidoka in his response asked if by speech the lawyer meant the coup speech Buhari made to declare the removal of a democratically elected government (laughter in court again).

In conclusion the prosecution lawyers were elated at the performance of Chidoka, their star witness. The defense lawyers were visibly distraught at their inability to inflict mortal damage to the testimony of the petitioner’s star witness. Case was adjourned to 29th July .