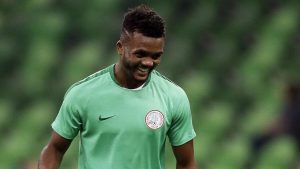 Chidozie Awaziem was added to Nigeria’s injury list on Saturday morning, joining Moses Simon and Wilfred Ndidi on the sidelines.

The Nantes defender had to be helped off the field by the medical staff after appearing to injure his ankle as he attempted to block Kelechi Iheanacho’s goalbound effort.

Awaziem is the second player to pick up an injury during the training camp, with Moses Simon suffering a hip injury in Thursday morning’s training session.

The forward didn’t train on Friday, and was spotted with an ice pack strapped to his hip.

“When we get to Port Harcourt, Simon will have a scan to see [the damage],” Gernot Rohr told journalists at a press conference on Friday, “but we hope it is not serious.”

Simon will likely be competing with the likes of Ahmed Musa and Alex Iwobi for a wide role in Nigeria’s starting XI in Russia, having impressed during the qualifying campaign.

By contrast, Ndidi’s recovery appears to be on pace, but the coach has already ruled him out of playing any part in Monday’s friendly against the Democratic Republic of Congo.

The Super Eagles then face England at Wembley on June 2 before they begin their World Cup campaign against Croatia in Kaliningrad on June 16.

Gernot Rohr running out of time to solve Nigeria attack

Benny gets his man as Bird joins Broncos