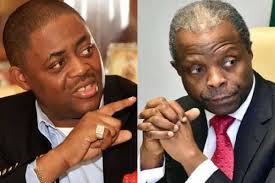 A chieftain of the Peoples Democratic Party, PDP, Chief Femi Fani-Kayode, has criticised Vice President, Prof. Yemi Osinbajo for saying Nigerians should endure the pains associated with the closure of Nigeria’s borders, alleging that those suffering the effect of the closure are southerners as borders in the North are not shut.

Osinbajo who spoke at a town hall meeting in Edo State on Friday, disclosed that border closure was aimed at ensuring that farmers become prosperous.

The Vice President said part of the reasons for the border closure was to get the attention of neighbouring countries to take border policing more seriously.

According to Osinbajo: “Part of the reasons for shutting the border is the smuggling that has been going on. If we continue to allow the Chinese and others to continue to bring in all those things, we will kill farming completely and most of our people will not be employed.

“There may be some pains in other to gain. The countries of the world that are prosperous didn’t allow anybody to bring in anything to their country.”

“Point of correction Mr. VP! You mean southerners should endure the pains of border closure.

“All borders in the north are open!”

How Herdsmen Killed My Uncle, while trying to save us- 7-Year-Old Boy