Is this a ghost dropping in for a pint0:32

At the Ye Olde Man and Scythe pub, freaky footage show a shadowy figure flickering into view at the bar, maybe waiting to be served

A TERRIFYING TV special that drew tens of thousands of complaints when it aired and was later blamed for one viewer’s suicide will finally see the light of day once more.

Ghostwatch aired on the UK’s BBC1 channel on Halloween night in 1992. The TV movie was a horror mockumentary, presented in the style of a live news report.

So convincing was this pretend investigation into poltergeist activity in a family home that it resulted in an estimated 30,000 calls to the BBC switchboard in one hour — many from terrified viewers who thought what they were watching was real, or furious parents of children who had become hysterical watching the special.

The BBC had certainly ensured Ghostwatch seemed like a believable news report, enlisting well-known presenters including Michael Parkinson to show viewers the ghostly goings on inside the house.

Parkinson spoke with authority from the studio, showing viewers ‘home video footage’ of a family being terrorised by ghostly beings in frightening and sometimes graphic footage. In this respect, Ghostwatch was a precursor to the ‘found footage’ horror phenomenon kickstarted by The Blair Witch Project seven years later. 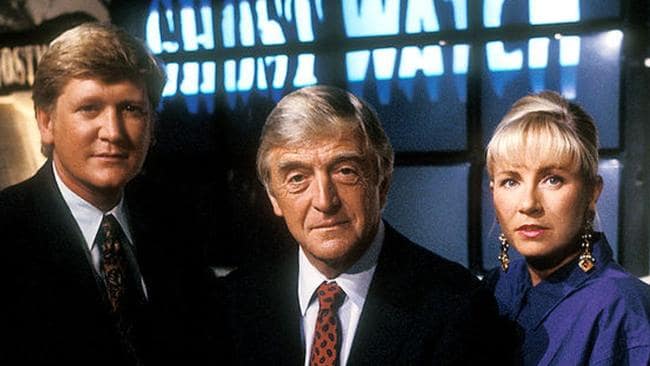 And make no mistake, Ghostwatch was scary: As the 90-minute special progressed, the spirit terrorising the home — dubbed ‘Pipes’, as the mother of the family had repeatedly blamed the strange noises on old pipes — gains power, as the BBC presenters look on in (mock) horror.

By program’s end, ‘Pipes’ had jumped from the haunted house to the BBC studio, dragging one host to a presumably grisly end and then possessing Michael Parkinson himself to take control of the TV channel.

Scary stuff, but Ghostwatch did more than just frighten viewers: It was also blamed for several cases of post-traumatic stress disorder in children, and for one young man’s tragic death.

Martin Denham, an eighteen-year-old factory worker with learning difficulties, committed suicide five days after Ghostwatch had aired. His mother and stepfather said Denham had been “hypnotised and obsessed” with the program, and convinced there were ghosts within their own family home. He left a note say that “If there are ghosts I will be … with you always as a ghost”.

Arguing that Ghostwatch had caused their son’s death, Denham’s family complained to the Broadcasting Standards Commission. In their ruling, the BSC found that “the BBC had a duty to do more than simply hint at the deception it was practising on the audience. In Ghostwatch there was a deliberate attempt to cultivate a sense of menace.” They found that Ghostwatch was excessively distressing and graphic, and stated that “the presence in the program of presenters familiar from children’s programs … took some parents off-guard in deciding whether their children could continue to view.” A scene from Ghostwatch — note the ‘ghost’ at left, haunting two young children.Source:Supplied

Indeed, a 1994 report in the British Medical Journal detailed several cases of children suffering from post-traumatic stress in the wake of the show.

“None of us thought we were creating something that would be one of TV’s most remembered programs,” said Parkinson in an interview more than 20 years after Ghostwatch aired.

“It was a simple ghost story based on a fairly ordinary premise that there’s a show on television and things start to go wrong. It was only when I saw it back that I realised it had a certain kind of power.”

The fallout from Ghostwatch was swift: The BBC apologised and has never aired it again on UK television, and it remained officially unreleased until an eventual DVD release in 2002. Since then, its underground cult status has grown, with fans holding special Ghostwatch screenings each Halloween.

Now, a US streaming service called Shudder — so far unavailable to Australians — has acquired the rights to Ghostwatch, meaning a whole new generation of horror fans will be able to see what the fuss is about for themselves. No word on a streaming release here in Australia — but the entire special is available to watch online, if you have a spare 90 minutes to scare yourself silly:

If you or someone you know is in need of crisis or suicide prevention support, please call Lifeline on 13 11 14 or visit www.lifeline.org.au/gethelp