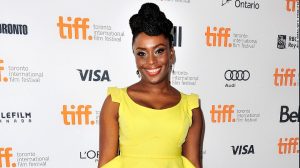 On Thursday, acclaimed feminist writer  Chimamanda Ngozi Adichie took part in an event for France’s annual Night of Ideas a�� during which she had to answer a question about whether there are any bookstores in her home country of Nigeria.

Caroline BrouA�, the French journalist conducting the interview, initially asked Adichie if people in Nigeria read her work, to which the writer replied, a�?They do shockingly.a�? From there, she decided to ask a�?Are there bookshops in Nigeria?a�?

When the audience responded with audible shock, she doubled down on her question. a�?You were talking about single stories, now when you talk about Nigeria, in France, unfortunately, there is not much said about Nigeria. But when people talk about Nigeria it’s about Boko Haram, it’s about violence, it’s about security,a�? BrouA� pressed. a�?I should like you to tell us something about Nigeria which is different, talk about it differently, and that’s why I am saying, ‘are there bookshops?’ Of course, I imagine there are.a�?

a�?I think it reflects very poorly on French people that you have to ask me that question,a�? Adiche responded. a�?Because I think surely it’s 2018, you know, I mean c’mon. My books are read in Nigeria. They are studied in schools, actually not just Nigeria, across the continent of Africa.a�?

Adichie was the star guest at a global ideas event hosted by the French government called a�?La Nuit Des Ideesa�? (A Night of Ideas).

Midway through the chat, she was asked if her books are read in Nigeria.

a�?Youa��ll be shocked to know that they are, yesa�� They are read and studied, not just in Nigeria but across the continent of Africa,a�? she said.

The interviewer then followed up by asking if there were bookshops in the country. The audience gasped and the visibly embarrassed journalist tried to back up, explaining that a�?not much is said about Nigeria in France.a�?

a�?We speak very little about Nigeria in France, certainly not enough, and when we do ita��s about Boko Haram and the problems of violence and security,a�? the interviewer said. a�?I would like to take advantage of your presence for us to talk about other things and things that we dona��t know about your country.a�?

Many Nigerians on social media mistakenly thought the interviewer was asking if there were libraries in the country because of the use of the French word a�?librairie,a�? which means bookstore.

Yvonne Mburu @ymscientist
Replying to @ymscientist
And to think the journalist doubled down on this ridiculous question with: Oh in France, we dona��t know very much about Nigeria. When we hear Nigeria we think about boko haram and violence and security. Tell us something different.

ADEKANMBI JAMIU @hadekneeyi
Replying to @ymscientist
Of course, that was not a question. It was a lazy and prejudiced insinuation.

But then, even though we have libraries, the culture around the use of library here is a lot different from that of Europe. And ita��s not because we do not like to read.

Twitter Ads information and privacy
One French commentator said the line of questioning was a a�?cocktail of racism and mediocritya�? that was typical of French journalism.

Twitter Ads information and privacy
Ahead of the event, the novelist had posted a picture of her meeting first lady Brigitte Macron in Paris on the steps of the Elysee Palace, the official residence of the French president.

Adichie is an award-winning author, humanist and feminist. Her TEDxEuston speech a�?We Should All Be Feministsa�? was turned into a book and given to every 16-year-old in Sweden. BeyoncA� also sampled it in her a�?Lemonadea�? album.