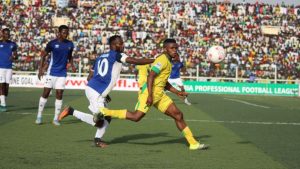 Kano Pillars defender Chinedu Udoji has passed away after being involved in a car crash, his club have confirmed.

a�?Chinedu Udoji was involved in a car accident yesterday after visiting his former team mates at Enyimba,a�? Pillars announced on their official Twitter handle on Monday. a�?This tragic accident happened along Club Road in Kano.

a�?Our deepest condolences to his family, friends, fans, and football lovers all across the country.a�?

The 28-year-old captained Enyimba to the Nigeria Professional Football League title in 2015 and the Federation Cup in 2014, before signing for Pillars in 2016.

The centre-back spoke to KweseESPN ahead of Pillarsa�� 1-1 draw with his former club, Enyimba, on Sunday, and had spent time with his former teammates in the immediate aftermath of the draw.

Udoji is survived by a wife and two children.
a�?The demise of Kano Pillars defender Chinedu Udoji comes as a rude shock to us this morning,a�? wrote the Nigeria Football Federation on their official Twitter handle. a�?Our thoughts and prayers are with his family and club.