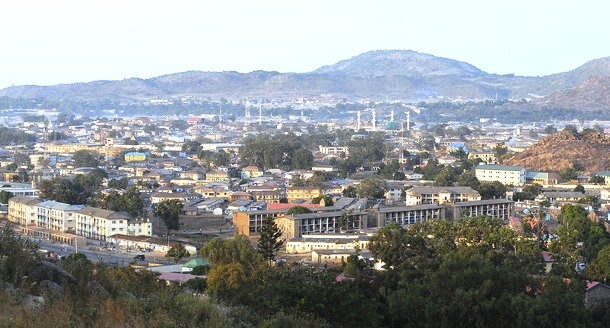 “Ancient traditions are good,” I murmured aloud to myself as we drove round parts of the Jos Metropolis. It was December 1st , 2018, the month of the birth of our Lord and Saviour Jesus Christ. I was in company of the husband of my bosom friend, Anita, married to Mr. Chiengle, an indigene of Plateau state. Both reside in Jos, state capital.

At first I resisted Mr. Chiegle’s suggestion for an evening leisure time out and sight-seeing tourism of the peace and calm that had returned to Jos. I dreaded it more as it was almost nightfall. Images of the violence and bloodshed of the previous years, especially from 2011, flashed back on my mind vividly.

But my host assured me of hundred percent safety and we hopped into his Hilux van and drove round. We went to places like Bokoss, Bukuru, Angwan Rogo etc,Just before we sat down at a roadside Restaurant and Bar on our way back home in Rukuba.

What I saw was the excited uniformity of the celebration of the Christmas Tree, erected conspicuously in different locations on streets and roadsides of these urban communities. The residents clustered around it and in some instances, electrified the atmosphere with Christmas carols.

The relics of destruction also reminded me of the dark days of bloodletting. I noticed security agents were also eagled-eyed on possible signs of breach of public peace.

I was now convinced about what my host told me. Jos has indeed regained its pride of place as “home of peace and tourism.” But God is really wonderful and works in mysterious ways! I murmured!

When I was a child,my father told me, Christmas is a season of peace. I saw for the first time an exact replication of what he meant, with what I saw in the course of my tour of Jos city that evening.

Again, I ruminated about Christmas repeatedly. It is a Christian feast in the heart of majority of Christians. All over the world Christians’ anticipate this month and Christmas day with trepidation.

And it means so many things to different people. It is a season of rejoicing for our redemption with the birth of Our Lord, Jesus Christ; it is a season of spiritual healing; It is a period which lays the template for the reunion of estranged relationships and reconciliation with our Creator, Almighty God.

And for many others it is a season of deep reflection over our lives. Whatever perspectives, this season is coloured by merriments and celebrations for all Christians on the face of the earth. And so, for some families, it takes a whole year to plan for this month and the Christmas day.

I decided to reunite with my old schoolmate at Madonna University, Okija, a cherished friend, who lives with her husband and family in Plateau state. We first met in the department of Mass Communication and became strong pals throughout our stay at Uni.

And since our graduation, we have become glued together like earthworms in copulation. We have never allowed the physical gap between us to weaken our relationship, even though; we live and work in different parts of Nigeria. We still find time to visit each other.

Anita’s husband, Engr. Chiengle works with a construction firm and has lived all his life on the Plateau. I also joined my cousins in Lagos after Uni and our operations are mostly based in Southern Nigeria.

At the height of the ethno-religious crises, when there was so much bloodshed, I would retire to bed some nights and sleep would evade me. My mind would keep thinking about the safety of my friend Anita, her husband, Chiengle and their three children. I called virtually every day to find out about their wellbeing. She has always assured me that God is in control.

“ Please Henrietta, I appreciate your concern anyway; but do not worry yourself too much over my family’s safety. My husband has told me that there is so much we can collectively do by remaining in Jos to see to the end of the crisis,” Anita insisted.

“Even a mere advice to the appropriate state leader or talking to people or groups could help a great deal, you know! Peace will return on the Plateau once we get the right leader” Anita hushed into the telephone one morning, during a phone call I put across to her, after a tormenting nightmare the previous night.

I dreamt the night before that armed bandits had raided a settlement near Rukuba, a part of the metropolis where my friend and her family lived, as they burnt and killed.

So, the next morning, I put across a call across, offering Anita’s husband, Engr. Chiengle a job in my father’s flourishing Construction company and the relocation of his family to Benin City for safety. But Chiengle resisted it and was rather confident of an anticipated peace, which to me sounded illusory.

That was in 2014, when Plateau state was no more the famed home of “Peace and Tourism;” but the “home of violence and blood.” It was a place dreaded by Nigerians and even the indigenes. Mass exodus of people from Plateau expressed the sorrows’ and agonies of an afflicted population.

The sad tales of the inhabitants of Jos resonated louder on the gloomy faces which lurked everywhere. I saw hunger-stricken people, also grappling with severe distress from violence. I was told, enmity between opposing tribes or religious sects was very violently expressed and frequently too. Many hearts were shuddered and dreams shattered.

But today, the narrative of violence and blood on the Plateau has changed. I rejoiced with my friends, the Chiengle family and indeed, the people of Plateau for this great relieve on the Plateau from the hands of enemies. It was my third journey to Jos, since I and Anita became intimate friends.

The experience of my first trip to Jos in 2000, during her wedding was memorable. But what I saw in 2014 when I last visited Jos before the current trip was horrible. Sounds of bombs and guns scared people at dawn, who would retreat into their houses early in the night. They were not guaranteed of safety either.

But I am happy the forces of light have overpowered the evil men. It was an incredible sight to catch a glimpse of youths, women, children, as everyone trooped out to welcome the Christmas Tree. Carnivals of Xmas Carols rented the air and people hanged-out out till midnight.

I was shocked to see, confirm and physically feel a city once in complete disarray and ruins, when I last visited about three years ago regain its lost glory so rapidly. The formerly almost a ghost city of Jos now radiates with life and fun.

When we retired home at about 12 midnight after the leisure time out, I whispered to my friend, “ Now I can confirm, everything has changed,” she nodded in approval and added, “ Our Governor, Simon Lalong is the architect of this change, security and peace. We thank God for giving us a leader of his wisdom.”

As I journeyed back to Benin, enroute Abuja, two days later, I kept wondering about the leadership ingenuity in Gov. Lalong. I told myself, what the Governor has achieved in restoration of peace or where he has succeeded, but his predecessors failed humanity would not be known immediately.

But posterity would certainly record his leadership history on the positive side as a leader who he has done well and sacrificed a lot for the comfort of his people and development of the state. He deserves accolades from Nigerians for all the efforts to descend peace and security on the Plateau.

Gov Okorocha & Eze Madumere: Who Is The Most Ungrateful?: A Question Sam Onwuemeodo Must Answer

8 thoughts on “Christmas: An Odyssey To Lalong’s Enclave”