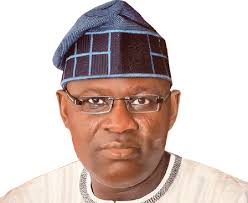 The Conference of Nigeria Political Parties (CNPP), Oyo State Chapter has described the death of Rt. Hon. Michael Adeyemo, the Speaker of the Oyo State House of Assembly as a huge and monumental loss.

The umbrella body of political parties in Oyo state said this in a statement issued and signed by its Chairman, Alh. Yinka Olona and Secretary, Mr. Angel Folorunsho, on Friday in Ibadan, the capital of Oyo State.

According to Alhaji Yinka Olona, a�?The death Rt. Hon. Michael Adeyemo saddens me. It is a huge loss to his family, people of Oyo State and the All Progressives Congress (APC).

The Chairman, who joined other sympathizers in mourning the loss of a prodigious and great leader, said the Speakera��s contributions to the statea��s House of Assembly and Oyo state politics would never be forgotten.

Mr. Angel Folorunsho, the Secretary of CNPP noted that the love of the departed politician for his state was never in doubt as he exhibited this through all his works and speeches even as a Lawyer and throughout his political life.

Late Hon Michael Adeyemo Popularly known as AMA was born at Adeyemo Family of Alaarun compound, Lanlate, Ibarapa East Local Government Area of Oyo State and he is the first child of the family.

He was the Deputy Chief Whip of the House and a member of committees of fund allocation, works and transport, Agriculture, trade and investment, appropriation and public finance in the the 7th Assembly.

He is a member of the Nigerian Bar Association (NBA) and International Bar Association (IBA), he served in the executive committee as an auditor and Assistant Secretary of NBA, Ibadan branch.

Part of his achievement as a lawmaker includes facilitation of the autonomy of two campuses of tertiary institutions in his constituency- The Polytechnic Ibadan, Adeseun Ogundoyin Campus, Eruwa and Emmanuel Alayande College of Education, Lanlate through His Excellency, Senator Abiola Ajimobi

. He is the also instrumental to the repairs and construction of ologuneru-eruwa road and Return Of bank to Lanlante after about 30 years and many more.

Adeyemo lost his wife about five years ago and he is survived by aged parent, children and siblings