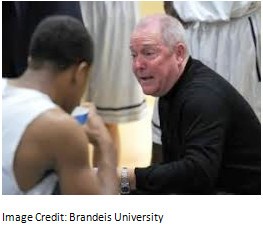 At a time when our current political environment is playing on people’s fears resulting in heightened racial division and tension in America and all around the world, it is no wonder that BrandeisUniversity (Boston, Massachusetts) men’s basketball coach, Brian Meehan, will champion racist behaviors and a racially-biased environment.

Since last year or so, this man has been under investigation for his racial and preferential abuses. Here is a man of privileged ethnicity who is misusing his state university status to dishonorably oppress non white players, especially those of African background.

While it took some time to remove this prejudiced man from his position of power and oppression,the University President, Ron Leibowitz, following a new complaint of Meehan a��s racist verbiage, in a letter addressed to the Brandeis Community, sealed him forever from continuously abusing students :

“I want to be absolutely clear: At Brandeis, there is zero tolerance for discriminating against any student, staff member, faculty member, or visitor because of their race, sex, religion, sexual orientation, gender or any other aspect of their identity.”

Meehan must have been empowered by the rhetoric of our present times, where we see neo-Nazis hitting the streets following the removal of Confederate symbols. In todaya��s America, bias, hate and racism have moved from the margins to new heights, so no one should be surprised by the overtly racist chants in a university setting.But with the removal of this man, the heightening of racial tensions in a place like Brandeis University will hopefully be reduced, especially when Meehan has been a coach at the university for 15 years

Meehan, as part of his derogatorylinguistic towards black players, once poured his racist words towards one African player. In two instances during the 2018 season, after Brandeis completed its investigation into this matter, Meehan purportedly told a first-year player on the team who hailed from Africa, a�?If you ever talk to me like that again, Ia��ll ship you back to Africa.a�? Later, during a practice session, Meehan, while looking for a place to sit down for a moment, saw the same player and commented a�?Oh, I dona��t want to sit next to him because Ia��ll get Ebola.a�? Meehan, who openly engaged in favoritism towards his sons who played on the team, is known for leading a team where black players were more likely to be cut from the team. An analysis of historical rosters showed that black players averaged 2.22 seasons, while white players averaged 2.9 seasons, and it was found that only one African-American player graduated from the team in the last four years. As part of Meehana��s abusive and racist behaviors, in 2015 it was reported by three black players that while they were sitting on the sidelines watching due to injuries received during practice, Meehan walked over and asked them to reenact the a�?see no evil,a�? a�?hear no evil,a�? a�?speak no evila�? monkeys.

One of the playersrecounted the experience as follows: a�?I remember a certain situation where I was hurt, there was another black guy that was hurt and then another one, and we were all put to the side to sit down,a�? One of the players, stated , a�?You know, we were just watching practice. Then he was like, a�?Hey, so-and-so, cover your eyes. Hey you, so-and-so, cover your mouth. And you, so-and-so, cover your ears.a�� If you look at the emojis, ita��s like three monkey emojis. And we didna��t understand it at first, but then I looked at my phone. I didna��t do it, because I didna��t know what he was talking about, and then I looked at my phone and was like, a�?What the heck?a��a�?

Report also revealed that on Martin Luther King Day 2017while the team was running drills, one black player, who was wearing the white side of his white-black reversible practice jersey, was told by Meehan that being white must be a a�?dream come true.a�?

Meehan was carrying out his racist acts while athletic director Lynne Dempsey, a white female, reportedly was looking away.Again, University President Leibowitz should be appreciated for letting the world know that the Meehans of the world will not be allowed to poison university grounds with their racial insensitivities and two-faced behaviors.

While no one institution is responsible for fixing race relations in America, let us try to keep places like universities safe from the offensive and distressing ways of Meehan as we work towards a truly post-racial society.

14 thoughts on “Coach Brian Meehan: The Face of Racism Complaints in American Sports”