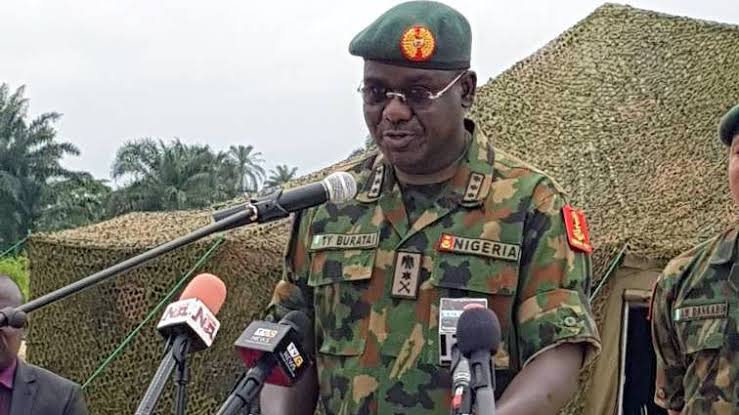 The Chief of Army Staff (COAS), Lt. He. Tukur Yusuf Buratai has said that the Nigerian Army is on top of the fight against Boko haram Terrorists, kidnapping and banditry across the country.

He also assured the House of Representatives Committee on Army that the Nigerian Army will continue to pursue the Terrorists until they are rid out of the country.

Buratai who stated this while briefing the 10-man house committee members who were in Maiduguri on a 2-day legislative oversight function Wednesday at the Operation LAFIYA Dole Theatre Command Headquarters Maimalari Cantonment Maiduguri said despite the soft target attacks by the BHTS, the NA has degraded their manpower and weapons while efforts are being made to deal the terrorists at their hedeouts who are on the run.

The COAS also appreciated the visists of the committee members and assured them that their visits will definitely heighten the high morale of the troops and give them more confident by way of gingering the troops in their operations.

Buratai added that the NA feel confident and gingered by the role and support of the house committee members as even the people of the north east recognise the role and presence of the Nigerian Army in the North East.

He however lamneted that during and after the 2019 general elections, some political class have been fueling banditry and kidnapping among other crimes across the country while calling on the house committee members to impress on their members and the upper chamber of the national assembly to appeal to the perpetrators to look at national interest first before their personal or political interest.

General Buratai also urged those politicans who are aggrieved with the outcome of the elections to exercise some restrain and allow peace to reign while appealing to the house committee to address challenges and problems of manpower and logistics the Nigerian Army is confronted with towards making the NA more professional.

He also assured that whatever the committee received will be incorporated n the final report being prepared by the committee for onward presentation to the house while commending the NA for its achievements.

The committee members were earlier before the briefing at the Maimalari Cantonment Cemetery to lay rreath to the fallen heroes of the fight against Boko haram insurgents in the north east and also visited the Hospital and Medical Services Centre of Maimalari Cantonment Maiduguri to sympathize with the soldiers wounded and still on bed responding to treatment and prayed for their quick recovery while appreciating their supreme price while in service of their fatherland.

"Bishop Oyedepo Is A Hater Of Buhari" – Presidency