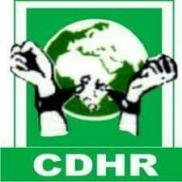 The NEC of the Committee for the Defence of Human Rights (CDHR), under the leadership of Comrade (Barr.) Malachy Ugwummadu, converged at the Rights House, #43 Adeniyi Jones Avenue, Ikeja, Lagos, for its National Executive Committee (NEC) Meeting. NEC reviewed the state of CDHR, 29 years after its formation; it also deliberated on the state of the nation, Nigeria, particularly on the abuses of fundamental freedom of citizens and of residents. NEC was worried about some recent happenings in the polity:

b) NEC also condemned the abduction of one of the aid workers who is critically ill at the moment.

NEC commiserated with the United Nations and the families of the murdered and kidnapped workers. NEC was certainly disturbed about the effect this could have on humanitarian services to displaced persons.

c) Dapchi school attack and abduction of school girls: NEC condemned the attack on Dapchi and the abduction of school girls as direct violation of their right to education and all other rights provided under the Child Rights Act. NEC also commiserated with the families of all the victims of insurgency in the North-East. NEC, on behalf of CDHR urged security agencies to step up their activities and ensure the safe rescue of all the girls and all citizens in captivity of the insurgents; let a�?Dapchi Girlsa�? not turn to another a�?Chibok Girlsa�?!

e) 2019 General Elections: Scheduling of elections, the powers of INEC vs. the National Assembly: NEC warned against political manoeuvring that violates the provisions of the Constitution of the Federal Republic of Nigeria; NEC also warned against any attempt to subvert the electoral process against the general interest of Nigerians. It is the position of CDHR that the power to schedule general elections, in relation to the offices of the President, Vice President, Governor, Deputy Governor and the National and State Assemblies in Nigeria, is unequivocally vested in INEC. Only a constitutional amendment could change that position, certainly not an amendment to the Electoral Act alone.

f)Ekiti and Osun Elections: NEC enjoined INEC to ensure the conduct of free, fair and credible elections in Ekiti and Osun States this year, 2018; those elections should be generally acceptable by all standards, to build confidence in Nigerians ahead of their expectations in the general elections of 2019.

g) Devolution of powers and constitutional amendment, state police LG autonomy, fiscal federalism, etc: NEC acknowledged the crucial need to review the structure of the Nigerian state, its governance and political process. As an ideal federal state, it is apparent that political power is heavily concentrated at the centre. NEC therefore considered the aspirations of Nigerians for restructuring and CDHR agreed that the call for restructuring is trite and requires all the will and commitment necessary.

NEC affirmed its resolve to ensure that CDHR remains focused and committed to the defence of Human Rights, and to promote coalitions to build strong resistance to all forms of rights abuses and abusers. NEC renewed its commitment to ensure that CDHR remains a viable voice for the voiceless; agreed to enhance the training of its members and promote strategies and programmes for advancing the protection of the rights of citizens.

NEC expressed the deep concern of CDHR on all matters of rights abuses; NEC particularly:

i. recognized that the rights of Nigerians have continually been grossly abused so much that Nigerians feel generally insecure and their lives and property unprotected;

ii. observed that Right to Life and security of property have become more threatened and abused, with the incidences of abductions, kidnappings and killings, especially extrajudicial murders by state actors;

iii. agreed that due to the failure of political leadership in the country, Nigerians have been subjected to poor governance at all levels;

From the foregoing, the National Executive Committee of CDHR, resolved as follows:

1. To expand the outreach for the defence of the rights and fundamental freedoms of Nigerians; to protect and advance the rights of citizens as a priority for the consolidation of democracy, peace, security and sustainable development.

2. To prevail on the Government to stop all incidences of kidnapping, terrorism, cultism, killings, including extra-judicial murders by state agents and all other acts that infringe on the fundamental right of all citizens and residents anywhere in Nigeria.

3. To demand that heads of security formations at all levels of the Police, Military and Para-Military institutions must take and indeed be made to take full responsibility of insecurity and abuse of citizensa�� rights in their areas of operation.

4. To engage in sensitisation of citizens on electoral participation; to urge INEC to always deliver credible election; NEC also resolved to deepen our engagement in election monitoring and evaluation for improvements. INEC must not fail Nigerians!

5. To further strengthen CDHR in line with our objectives through the review of the Constitution of CDHR, 2005, to reflect on the character of the organisation with the view of promoting the desires of members.

The Most Successful Ethnic Group In The U.s. May Surprise You