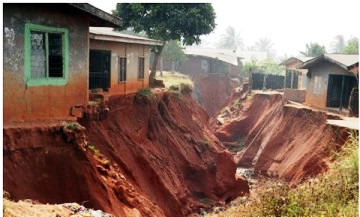 The name `Delta`, is indicated of the geographical location of the state with its unique flora and fauna. Delta State is a coastal state to some extent and nature blessed it with crude oil, the money spinner for the country. However, the presence of crude oil also comes with its environmental challenges of acid rain, environmental degration which results in floods and erosion. The government is not sitting idle and contemplating its political navel, rather there is a comprehensive programme to tackle the issues of floods in Asaba and other major cities across the length and breadth of the state. After all, the chief purpose of governance is the security and welfare of the citizens.

If you a first time visitor to Asaba, you would notice the massive construction of drainage along the popular Nnebisi Road, the Agric Road, the Jesus Saves Road and that will terminate in the Direct Labour Road notorious for floods and most residents of the street usually seek for safer abode during the rains. You do not need to be an engineer to know that the drainage is being handled by a reputable construction firm. The drainage is so deep that it could take a three storey building. The efforts of the government did not come out of the blues rather it is a strategic partnership among the Ministry of Environment, the Ministry of Works, the Delta State Capital Territory Development Agency and the Delta State Nigeria Erosion and Watershed Management Project (NEWMAP).

Throwing light on solving the problem of floods in Asaba and other parts of the state, the director-general of the Delta State Capital Territory Development Agency, Chief Clement Ofuani disclosed that the government worked out well thought engineering design to address the problem of flood in Asaba once and for all. This is how he explained it: `I have a firsthand experience of the Asaba annual flood. Some of the causes could be traced to the rapid pace of development and urbanization of the city. Initially there was no adequate plan for the flood infrastructure and rapid urbanization. We needed a scientific answer why drainage system was not working, not well planned, the size of the drainage and the buildings on the streets and roads. In some cases, there were no discharge points for the drainage. A typical example is the Direct Labour Agency Road; the drains on both sides of the roads were leading to nowhere. Today however, the situation is different. We at this agency had consultants and engineers and working with the Ministry of Works, a massive drainage construction is going on the Nnebisi Road and the water shall be channelled into the Anwai River and the River Niger and very soon as the work is completed, flooding in Asaba shall become history.` It is the prayers on the lips of every Deltan that the sentiments of Ofuani shall be given practical ventilation given the harrowing and traumatic experience the residents of Asaba normally pass through when the Heavens open.

On the part of Delta State Nigerian Erosion and Watershed Management Project, the project director, Mr Isaac Ufiofio maintained that though the agency is constrained to intervene in areas where the state government is working, the agency still has the commitment to contribute to the eradication of flood in the state capital and other major cities. He disclosed that the agency is helping to clean drains and reconstruct failed drains. He spoke of the strategic collaboration between the Ministry of Environment and NEWMAP to tackle five erosion sites across the state.

He further explained what his agency is doing to combat flood and erosion in the state:` The project is an interventionist programme assisted by the World Bank in collaboration with Delta State government under the auspices of the Federal Government. The project is designed to reduce vulnerability to soil erosion in targeted sub-catchment areas with the aim of focusing on gully erosion and flood states that threaten infrastructure and livelihood in the state. In line with the SMART agenda of `Transforming the Environment through Urban Renewal`, Delta State is among the twenty-one (21) states in the federation that has keyed into the project of the World Bank/NEWMAP and has paid five hundred and thirty million Naira as counterpart funding`.

It would be recalled that during the recent press parley of the governor and journalists, Senator Ifeanyi Okowa explained in details the comprehensive plan of government to tackle once and for all the plagues of erosion and flooding ravaging the state especially the state capital.

This is government plan to contain the two environmental disasters according to Governor Okowa: `You will also have noticed that we have taken the bull by the horns as regards the flood control in the state capital in the storm water drainage. People would have asked what the state government has been doing, we needed to undertake proper studies and it took us a lot of time, because, we wanted to be sure that we were on the right path. We did not just want to start constructing drains all over again without bringing solutions to the flood issues in Asaba.

So our consultants worked with the Nigerian Society of Engineers in Asaba and eventually, we resolved that what the consultants have presented to us was the way to go. Apparently, they did provide us eight options of drains, storm drainages that we had to undertake as a state which was put as a total cost of a little above N30billion and out of the eight, we found out that three ideas were good for us and we decided that we were going to work with these three as they were critical and the total cost of the three is about N11billion. The first one we commenced with was the one that is going to be within the area of DLA Road through Jesus Saves Road, the Agric Area and that is the construction that is on-going`.

The governor also harped on the competence of the Chinese construction firm CCECC and that of SETRACO Nigeria Ltd with the firm confidence that the issue of Asaba flood shall become history.

The governor painted a rosy picture after the construction of the drainage is completed: `So hopefully, the project will be delivered by God`s grace by the end of February 2019 and once it is completed, it is going to drain the larger part of Okpanam, while part of the water coming from Okpanam will be drained through the project that is currently ongoing in Okpanam that has a discharge point to the Iyiabi Stream that crossed the Asaba/Onitsha Expressway….. The third of the storm drainage projects is the one that is going to drain DBS area and the adjoining areas and that project is awarded to SETRACO Nig. Ltd, a very reputable company.`

The investigation carried out by this reporter revealed that a lot of Deltans and residents in Asaba were very happy at the construction of the drainages and implored the state government to keep the contractors on their toes more so that the rains are around the corner. While bearing the anguish of the traffic gridlock on the Nnebisi Road especially around the Federal medical Centre axis, the people observed that should the drainage construction ends, the government it its wisdom should construct roads from the Ogbogonogo main market to the Delta State University, Anwai along the bank of River Niger so as to ease the traffic burden on the Nnebisi Road. One of the respondents who spoke to this reporter tasked the government not to forget the city of Agbor as far as erosion control is concerned. He also mentioned Sapele, Warri, Ughelli, Bomadi, Jesse, and Patani as these areas prone to erosion and coastal flooding. The environment is our mother and should be handled with care and that is the enduring message of tackling erosion and floods across the state.

Osun 2018, Politics Of Zoning, And The Apc’s Big Gamble

Pmb And The Lazy Nigerian Youth

200 thoughts on “Confronting floods and erosion in Delta State”