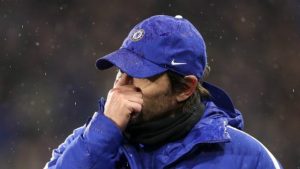 Antonio Conte feels Champions League qualification is likely beyond Chelsea after a 1-1 home draw with Huddersfield Town in the Premier League on Wednesday.

Marcos Alonso’s fluke goal levelled after Laurent Depoitre gave the Terriers the lead at Stamford Bridge, but Chelsea could not find a way to beat Jonas Lossl late on despite intense pressure, the goalkeeper brilliantly tipping an Andreas Christensen header on to the post.

With Chelsea in fifth, last season’s champions must hope Liverpool slip up at home to Brighton and Hove Albion on Sunday, so they can take advantage in their closing match of the campaign away to Newcastle United.

And Conte, who rested Eden Hazard and was without goalkeeper Thibaut Courtois due to a back injury, accepts a top-four finish will now be difficult for Chelsea.

“The situation wasn’t in our hands before this game and, for sure, the possibility is less now after this game,” Conte told a post-match news conference.

“At the same time, we have to try. We have to try to do our best. We played an intense game, with great desire to get three points. But we weren’t able to win the game. That’s football.

“I’m realistic. I think that, at the end of the season, you finish in the position you deserve. We dropped too many points this season. If we stay fifth in the table, it means we deserve to stay in this position.”

Although Hazard and Olivier Giroud were named on the bench, Conte denied he was prioritising next weekend’s FA Cup final against Manchester United.

“I did the rotation also against Burnley,” Conte said. “To make rotation, it means playing with players like [Alvaro] Morata, Willian and [Andreas] Christensen, players who usually are in the lineup from the start.

“It’s stupid if we think rotation was a problem. We are Chelsea. We have a big squad and players who can play the whole game, but they must win. At Burnley we won the rotation was good. We spent a lot of energy against Liverpool. People said that lineup was not good, but we won. This is football.

“But we must respect Huddersfield. For sure, they started this game with only one target in their mind: to take one point. For this reason, they wanted to defend very deep. I think we must give a best compliment to Huddersfield for this result.

“We had the chances to score, but we didn’t take them. But congratulations to Huddersfield, the players and the manager and the club, for them.”