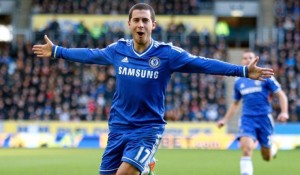 Chelsea intend to resume contract talks with Eden Hazard in the new year aimed at extending his stay at Stamford Bridge but the player is apparently in no rush to commit his future while it is unclear whether  Real Madrid  will prioritise his signing this summer.

Hazard, who does not operate with an agent, is contracted to 2020 but, with  a new deal  first mooted towards the end of last season, has held discussions with the Chelsea hierarchy over an extension on improved terms. No formal offer has been made despite claims to the contrary by Hazard’s father, Thierry,  to the Belgian newspaper Le Soir . Hazard senior suggested his son had rejected an offer while he awaits an indication from the Bernabéu whether their long-standing interest is likely to prompt a bid.

Chelsea have no intention of losing the Belgian international and are confident he will eventually sign a new deal. They are  close to securing his compatriot, Thibaut Courtois , to a new five-year contract which will make him the highest-paid goalkeeper in the Premier League, and will follow that up with a firm contract proposal to Hazard next month. By then the head coach, Antonio Conte, hopes the champions will have demonstrated their own ambitions to the player by some early moves in the transfer market.

“If you are in a great club and you trust the ambition of the club, it’s right to stay,” Conte said. “We are talking about two important players for us [Hazard and Courtois] and, for sure, it is important to continue with this type of player, especially if your ambition is to try and compete for something important.

“It’s very important to try to improve your team, to strengthen your team, and not to sell the best players. But [on Hazard’s new contract] these are private conversations between the player and the club.”

The Italian sees room for further improvement in Hazard’s game. “He could score more. “When you are a striker, or a No10, your speciality must be to score. I think in this aspect he has a lot of space for improvement.”

Conte described the next month as “important if we are able to find the right players”, but admitted Chelsea’s manoeuvring in the winter market was in effect out of his hands. Recruitment will be overseen by the director Marina Granovskaia with heavy input from Scott McLachlan, the club’s head of international scouting, while they continue to operate without a technical director following Michael Emenalo’s resignation in November. Granovskaia intends to interview candidates for the vacant role next month, though the club could decide to disperse Emenalo’s roles among existing staff.

Chelsea may have edged ahead of Tottenham Hotspur in the chase for Everton’s Ross Barkley, who  opted to remain on Merseyside  in August while he underwent rehabilitation for a serious hamstring injury. Conte has made clear that, having made his recommendations to the board, the club will ultimately determine which targets they pursue. “It’s very important to look at ourselves and then try to find the right way to improve,” he said. “In my hand the way to improve this team is to work. On the other hand there is the club and the transfer market. But I can only speak about my hand.

“I’m a coach and I have to work with my players. My task is on the pitch. For the transfer market, there is the club. The club decide whether they want to improve the squad or the team. They take the best decision if they see we can improve with some [new] players. But I’m the coach. I am here to work on the pitch with the players the club give me.”

The ramifications of missing out on European football last year have been reflected in Chelsea’s annual financial results, announced on Friday, which revealed the club had relied upon player sales to record an overall profit of £15.3m. Matchday revenues for 2016-17 fell in the absence of Uefa competition and  Chelsea , who had finished 10th the previous season, recorded an operating loss, with player sales of £69.2m, the bulk of which was Oscar’s transfer to Shanghai SIPG, ensuring they reported an overall profit.

Turnover grew to £361.3m, up 9.8% on the previous year, with broadcasting revenues increased as a result of winning the title, along with the commencement of the Premier League’s latest contracts with television broadcasters. The club continues to comply with Uefa’s break-even criteria under Financial Fair Play regulations, and expects revenues to grow this season as a result of their new partnership with Nike, which began in July 2017, and their return to the Champions League.

Chelsea FC plc’s ultimate parent company Fordstam Limited, which is also responsible for the group’s non-footballing operations, reported a consolidated loss of £14.2m for the year which has been explained by planning costs for the redevelopment of Stamford Bridge and losses at non-football ancillary businesses.