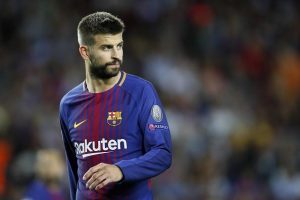 Chelsea’s up-and-down 2017/18 season has proven to be significantly different from last year’s Premier League title-winning campaign, but the Blues are hopeful that they’ve found their form at the right time.

Manager Antonio Conte and his club currently sit fourth in England’s top flight, and with a 19-point gap separating the Blues from leaders Manchester City, the Italian boss can turn his attention to the UEFA Champions League a�� which the competition picks back up for the London side on Tuesday.

It won’t be an easy task though, with Spanish giants Barcelona eagerly waiting in the knockout phase.

With a dynamic attack, led by Lionel Messi and Luis Suarez, Conte believes that Chelsea must exploit Barca’s defensive a�?weaknessa�? in order to have any shot at advancing to the quarterfinals.

a�?We have been analyzing this team for a long time; we started one month ago and analyzed this team,a�? Conte said. a�?We are speaking about one of the best teams in the world. We have to try to have the perfect game and to try to make the best decisions also for this type of team.

a�?This is a different opponent. They have a fantastic characteristic with the ball, but they can have a weakness without the ball and we must try to exploit this.a�?

While Conte’s belief in his attack, which boasts plenty of quality players in its own right, is admirable and likely the difference in the Round of 16 clash, Barcelona’s back line has been stellar for most of this season.

The Blaugrana have conceded just 11 times in La Liga play, second to only Atletico Madrid a�� who has allowed nine goals. Barca currently sits ahead of the pack in Spain’s first division, boasting a perfect record in domestic play.