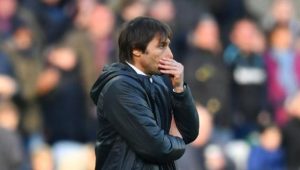 The defending Premier League champions look anything but the team they were a season ago, and  Antonio Conte  has reiterated his concerns regarding his side.

Chelsea currently sit fourth in the PL on 50 points, well off the club’s pace from the 2016/17 when the Blues went on to win the title.

The Stamford Bridge side has now lost two of its last three matches in all competitions, including a shocking 3-0 home defeat to Bournemouth on Wednesday.

Now, Conte is looking for his squad to fight to remain in the top four, with the PL title well out of the team’s reach.

a�?I think now we must be realistic and understand what our level is,a�? Conte said. a�?Now we have to struggle to fight for a Champions League place. That is the top [priority]. We must be strong to accept this type of situation.

The former Italy international boss has chalked up some of Chelsea’s struggles to the drastic changes that the club has undergone in recent seasons, which includes losing staples of team like  Didier Drogba  and  Petr Cech .

More recently, the Blues sold off  Diego Costa  and  Nemanja Matic , as well as  Nathan Ake and  Juan Cuadrado , which have caused more turnover in the squad.

a�?We are in a moment that we have to create a basis,a�? Conte added. a�?We have to build something important. To do this, you must have 15 or 16 players. In the summer we changed eight players. That means you don’t have a basis, a great foundation. We must have great patience to understand the moment.

a�?We lost strong, experienced players in the last few years, so we must have patience to understand that, now, we have to appreciate the moment, be realistic, create a basis and then build something important to face big challenges with the other teams.a�?

Who will ring bell at Rip Curl Pro Bells Beach 2017?