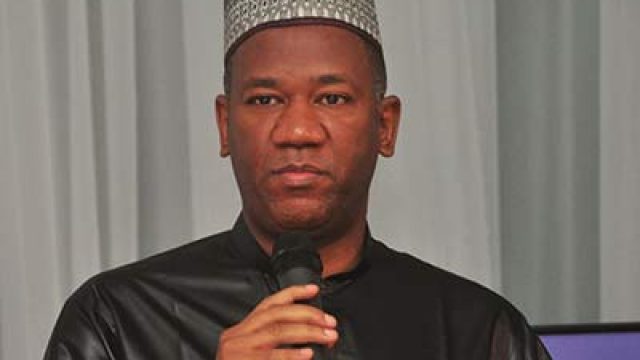 “I am contesting because I must”

Getting Dr Datti Baba-Ahmed, founder and Pro-Chancellor of Baze University, to agree to this interview – I prefer to call it conversation- was surprisingly easy. I had sent him a WhatsApp message introducing myself and telling him about the conversations I have been having with some presidential aspirants for my Thursday column in the Daily Trust (back page). I asked if he would be interested in taking part in such conversations. “Yes, Sir”, he replied only a few minutes after I sent my message. Hmm! When men of power and accomplished individuals resort to answering you, “Yes Sir”, common sense dictates some deconstructions to fathom out if they are genuinely trying to be humble or approachable or if it was meant as a sophisticated condescension or an innuendo asking you to please give them their space.

“We can work around your schedule. We can have the interaction at your convenience”, I replied. He promised to call or text later.

The following day I received a message suggesting we should meet at Wadata Plaza – the PDP headquarters on Friday, June 29, 2018. I complained that given the hurly-burly nature of a political party office, that Wadata Plaza might be inappropriate for an interaction that would take an estimated 40-60 minutes. He assured me it would be fine. I had no idea that he was going to make his official expression of interest to be the PDP’s presidential candidate on that day.

I was at the Wadata Plaza and listened to him speak ex cathedra , and without notes, for some forty minutes, on why he wanted to run for the presidency of the country on the PDP’s platform. The summary of his message was that things had become so bad in the country that there was an urgent need to rescue the country from inevitable implosion under Buhari’s watch. “I am running because I must,” he declared to a thunderous applause.

As expected it was not possible for the interaction to take place at the Wadata Plaza. There was the crowd, the press people, and the praise singers with their instruments – all wanting to get a piece of him.

We met in his home in Abuja the following day, Saturday June 30, 2018. He was quite tired, he said, as he joined me in the lounge. I consoled him, telling him it comes with the territory of seeking for the highest office in the land.

I explained ‘the rules of engagement’: the series is not a traditional question and answer interview but a conversation, in which I would ask tough, even provocative questions. The aim of such a format, I further explained, is not to diminish any candidate’s aspirations but to use their answers to such questions to create their portraiture for my readers. He said he was comfortable with the format.

I fired my first question: He won his election as a Member of the Federal House of Representatives under the All Nigeria Peoples Party (ANPP) in 2003. At that time Buhari was the biggest name in the party. In 2011 he contested for the Senate under Buhari’s Congress for Progressive Change (CPC) and actually defeated the incumbent Ahmed Markafi by whisker. Again in 2015, he supported the presidential aspirations of Buhari. At what point did he discover that Buhari was not what he thought he was? Doesn’t he think some may accuse him of ingratitude after apparently riding on Buhari’s coat tail to become a legislator in 2003 and 2011?

He disagreed with my submission that Buhari was the dominant personality in the ANPP in 2003, arguing that the national chairman of a party is the dominant figure in that party. He also disagreed with the notion that Buhari was the founder of the CPC. He said that before he decamped to the CPC there was a long debate between him and his promoters who wanted him to cross over to the CPC which he did reluctantly.

He said he actually began to notice problems with Buhari in 2007 during the ANPP’s Senate primaries in Kaduna in which he favoured a particular “cash-rich candidate” against the preferences of the people from that senatorial zone. The same thing, he said, happened in the prelude to the governorship primaries for Kaduna in 2015 when, at a rally organized by Nasir El Rufai (now Governor of Kaduna State), Buhari raised El Rufai’s hand as his anointed “because of his financial contributions” – which he felt was wrong.

“I have never had a poster of Buhari in my campaign. I rode on my own popularity. Don’t forget that every one, no matter how small, adds value. Buhari himself was brought up by the Nigerian army so Buhari also rode on the popularity of the Nigerian army. Everyone somehow rides on someone. For instance you write for Daily Trust because it is a credible medium. You add value to them and they add value to you.”

He became more vehement in his criticisms of Buhari after 2015, he said, because of Buhari’s “woeful performance” in office. He listed indices of the “woeful performance” to include the depreciation in the value of the Naira “by over 40%”, which he argued, adversely affected the living standards of Nigerians; interest rates which, he said, shot up higher under Buhari’s watch; companies closing down on daily basis; foreign exchange manipulations; pervasive insecurity and influence peddling. “They did not deliver on their promise. Terror has spread from the North-east to the North-central with the incessant herdsmen-farmers’ clashes. There is also the corruption in his government. This is why it is difficult to keep quiet. I can’t keep quiet. I am contesting [for the presidency] because I must”, he reiterated.

Does he think that his education, (a bachelor’s degree, two master’s degrees and a PhD) as well as the founding of a successful private university are enough preparations for the presidency of the country? Does he have what it takes to survive in the murky waters of Nigerian politics? Does he have the necessary ‘rough edges’ to take on Buhari’s fanatical supporters in the North?

“I can say that for someone who has risen from being a Member of the House of Representatives to being a Senator and now contesting for the presidency, has demonstrated a staying power and has done well. What preparation did Buhari have when he became Head of State and President? GCE O level? I have been a member of the House of Representatives and a Senator. Don’t forget that in many advanced democracies a Senator is ranked higher than a Governor and that many Presidents in the US had been Senators. So I believe I am adequately prepared for the office.

“Please do not try to diminish the value of Baze University. Don’t forget that Thomas Jefferson [the third President of the United States, 1801-1809] was asked his greatest achievement and he replied that he founded a University [the University of Virginia was conceived by Thomas Jefferson at the turn of the 19th century]”.

I assured him that I was not trying to diminish his university and informed him that I was actually an adjunct and Head of the Department of International Relations and Diplomacy at the University.

On whether he has the necessary ‘rough edges’ to take on Buhari’s fanatical supporters in the North, he replied; “If I know the specificities of what you call ‘rough edges’, I will know how to address each component. But let me tell you that when people talk of Buhari’s popularity in the North, it is all about using the hatred and the illiteracy of the masses, (the talakawas) against the elites and positioning himself as the champion of the interest of the masses.” He referred to the tribunals set up by Buhari’s military government in 1984/1985, which he argued herded many people into long prison terms on spurious charges, and said Buhari has been able to exploit such to position himself as being with the masses against the elites. “Where in the world can you have such nonsense? Many of the tribunal members were not even qualified and people were just being thrown into jails”, he said.

Was he not being too critical of Buhari? And had the criticisms anything to do with the Buhari government not offering him a ministerial appointment, in particular the Minister for Education, as one report alleged? No he did not think he was being too critical of Buhari. “My criticisms of Buhari are never borne out of disrespect. I never use disrespectful language and my politicians are generally banned from using insulting or disrespectful language on any one.” He also explained that his criticisms had nothing to do with not being offered any appointment. He explained that after the 2015 elections, and following the convention that a Governor, his Deputy and the ministerial slot for a State must be spread around the three senatorial states, he was persuaded to send his papers for ministerial considerations since following that convention, his senatorial zone was supposed to produce the minister from the state and he was the highest ranking party member as a former Senator. He said he never really actively pursued that option as he was at that time still more devoted to “developing Baze University into a world class university”.

“Under Buhari, corruption which he promised to fight has aggravated, there is extortion and nothing is working as it should. I have therefore every justification to strongly criticise his government. Anyone asking me to keep quiet in the midst of all these is wasting his time. Are we slaves to Buhari that we will see all these nonsense and keep quiet?”

On how his government would be different from Buhari’s government, he identified what he said would be his government’s immediate priorities – ending the reign of terror and impunity in the country, ending herdsmen and farmers’ clashes, minimizing crime to the barest minimum, revamping the economy by stabilizing the value of the Naira for at least ten years, lowering interest rates, flooding Nigerian banks with ‘loanable’ funds and promoting living wage. He reminded me that at Baze University members of staff generally earn 25 per cent more than what is obtainable in public universities. “So it is not about empty talk. I am not perfect but when I say something I mean it. I am not doing this for myself. I am doing it for the country,” he reminded me.

Given that ‘restructuring’ is likely to be a major theme in the 2019 election, what does he understand by the term and what is his attitude to it? He agreed that there are “diversities of comprehension” when it comes to restructuring “but for me restructuring is a constitutional matter, not a presidential matter. I will support any legitimate constitutional measure that will improve the quality of governance, make things work better in the country and make every Nigerian feel that he or she is a stakeholder in the Nigeria project.”

Yusuf Datti Baba-Ahmed, 48, studied economics at the University of Maiduguri (B.Sc, 1991; M.Sc. 1995) and also holds an MBA from Cardiff University, UK (1996) and a PhD from the University of Westminster, UK (2006). He also has certificates from several professional programmes, including from Harvard University. He founded Baze University in 2011, which in a short period of seven years, has grown into one of the most respected private universities in the country. He also runs two other companies – a construction company and a consultancy firm – which together with Baze University employ some 600 Nigerians from every state of the country.

Dr Baba-Ahmed, a former Member of the House of Representatives under the ANPP and former Senator under CPC decamped to the PDP in November 2017 and formally expressed his interest in seeking the party’s nomination for the presidency on June 29, 2018.

Nwobodo is an institution, his coming back to PDP adds value – Obaze

NATIONAL ASSEMBLY AS A TALKING FACTORY.