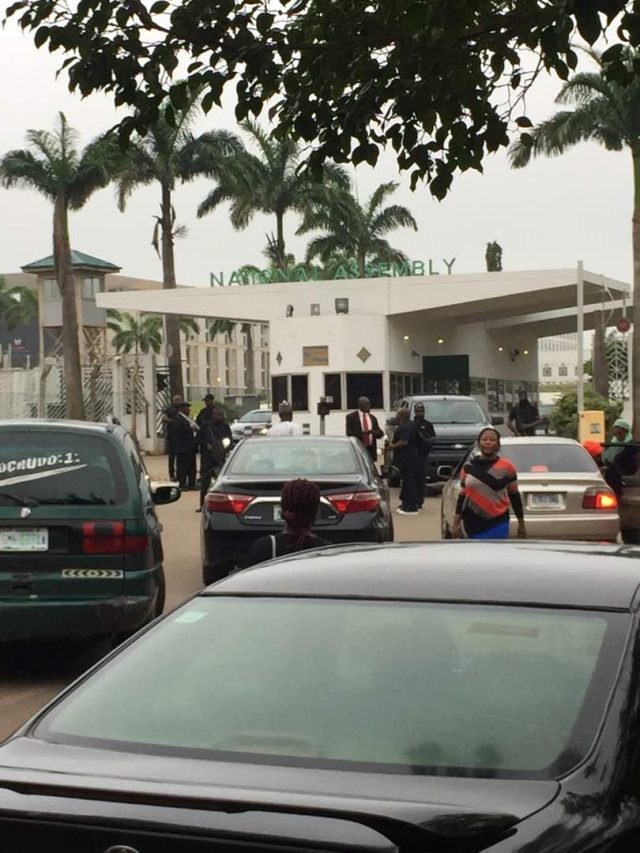 This was a bad week net, for Nigeria’s President Muhammadu Buhari. What a difference a 10-day Presidential vacation makes. President Muhammadu Buhari hurriedly left on vacation to London last weekend. Shortly before his departure, President Buhari had a security meeting with his service chiefs, on August 2, 2018. Most likely, hisexpectation based on credible assurances from his cabal,was that he would meet a different political skyline on his return.

In his absence there have been not one as he may have expected, but two coups in Nigeria. The attempt,using masked State Security Services, SSS agents, to decapitate the National Assembly and reduce it to a stooge assembly unable to serve its constitutional role of check and balance against executive excesses,failed spectacularly.

In the wake of the failure, one desperate sycophant seeking election into the National Assemblyis openly campaigning on the ideological platform of a Buhari life presidency. Since it is merely a question of time for this sycophanticidea to acquire a life of its own, we must add life presidency to the list of potential Executive excesses.

In the immediate aftermath of the failed coup, Vice President Yemi Osinbajo who as Acting President waspossibly pre-positioned by the Buhari cabal as the fall-guy for their cabalist expedition, proved that he is adept at close-quarter political combat. He executed the second coup, this time targeting the cabal themselves.

Effectively Vice President Osinbajo may have stripped the Buhari cabal in the short term of one of their favorite state organs for political mischief. Do not expect Mathew Seiyefa to be confirmed as substantive head of the SSS any time soon. In fact, as you read this, stung cabalists and their agents are probably combing Mathew Seiyefa’s hidden closets searching for kompromat.

On the plus side, during his vacation,the All Progressives Congress (APC),President Buhari’sparty,secured a high-profile defector from the opposing Peoples Democratic Party (PDP) in the person of the former Aqua Ibom State Governor Godswill Akpabio. This was after losing a host of other defectors headedin the opposite direction, including Senate President Bukola Saraki.

There are credible speculations that Godswill Akpabio was penciled down as the replacement for either Senate President Bukola Saraki or the Deputy Senate President Ike Ekweremadu, by the cabalists. On Sunday August 5, 2018 newsstarted filtering in that Godswill Akpabio met President Buhari in London that day. On Tuesday August 7, 2018, Nigerians woke up to the news of a siege by masked SSS operatives on the National Assembly. Was this mere coincidence? What do you make of it?

What was so urgent about the Buhari-Akpabio London meeting that could not wait 10 days for the President’s return but warranted Akpabio flying to London to disturb the sickly President enjoying his rest? The most credible answer is that Akpabio went to pledge his loyalty, establish a personal link and secure the President’s blessing for his anticipated position.

On the minus side for the President, the planned decapitation of the National Assembly via impeachment of the Senate President Bukola Saraki and his deputy Ike Ekweremadu failed spectacularly and rubbished his much-vaunted integrity before a global audience.It permanently deprived him of one of the key members of his cabal in the person of Lawal Musa Daura, now ousted in ignominy.

It led to the ceding out of one of his key instruments of regime protection, the SSS, to a non-cabalist and non-Fulani Mathew Seiyefa.Furthermore, it portrayed the planned fall-guy, Vice President Yemi Osinbajo as more adept, more capable and more reliable than the President in steering the complex ship of state out of the troubled waters created largely by the President’s glaring incompetence. Even Vice President Yemi Osinbajo political opponents in the PDP applauded his decisiveness.

Mounting evidence suggests that the APC, the Presidency and the Buhari cabal were blind-sided, stung and concussednot by the failure of the cabal’s legislative coup but by Vice President Osinbajo’s subsequent coup within a coup. The incoherence of their reactions and their ongoing attempts to manipulate the sordid events at the National Assembly to nail the Senate President Bukola Saraki at all costs, smacks of panic and post-traumatic failed coup disorder. Expect the knives to be out to cut the Vice President down to size very soon.

The APC’s initial reaction during the cabal’s coup was to disassociate itself and its members from the siege by saying it was “strictly a legislative matter.” On Tuesday evening after the coup had failed it recanted and joined other outraged Nigerians to condemn the “unfortunate invasion” while dissociating itself from the “act of brigandage and affront on the sacred symbols of our budding democracy.”

By Wednesday morning the APC went on the offensive by blaming the National Assembly siege on “a sinister plot hatched by the Senate President Dr. Bukola Saraki to ferment violence in the legislative chamber all in a bid to stop his impeachment.” The APC statement continued. “Our investigations uncovered and noted the following:We are now aware that the timely intervention of the security operatives forestalled the planned violence which could have led to possible deaths, injuries and destruction of property in the National Assembly on Tuesday….”

As far as the APC were concerned therefore the securityoperatives who laid siege on the National Assembly were acting in “the national interest.” By inference, they could not have been too pleased with the Vice President for sacking and making SSS boss Lawal Daurathe scape-goat.

From the Presidency, the Acting President’s media aide Laolu Akande issued a statement shortly after the firing of Lawal Daura on Tuesday which hinted thatparticipants in the national assembly siege would be subjected to “appropriate disciplinary action” (let us wait and see) and that the “unlawful act which was done without the knowledge of the presidency is condemnable and completely unacceptable.”

On Wednesday the special adviser to the President on media and publicity Femi Adesina, tried to paint the picture that the President and the Vice-President were on the same page on Daura’s firing. “When something like what happened yesterday [happens], there will be unanimity. There is no way there won’t be unanimity on that kind of decision. It’s not something that will be discussed with the press but know that there was unanimity in the decision.”

As for the luckless Lawal Daura himself, he was initially said to be held under house arrest and under interrogation by the Police, whose boss Idris Ibrahim, the Inspector-General of Police, narrowly escaped a similar fate because he claimed that his men were not involved in the siege of the national assembly. Later Lawal Daura was said to have been released from detention and allowed to go home without his international passport.

On Thursday, preliminary Police investigation reports leaked from the Presidency were published in the media that seemed to suggest that “the principal suspect Lawal Daura may be acting the script of some highly placed politicians to achieve selfish political goals, hence his unilateral and unlawful decision to invade the National Assembly complex.”

Just before then a flurry of articles and speculations obviously sponsored by cabalists and the APC seemed to suggest and strongly hint that Senate President Bukola Saraki and his deputy Ike Ekweremadu had sponsored the National Assembly siege themselves to score cheap political points. Saraki and Ekweremadu were forced through their media aides to alert the world on the fresh conspiracy and attempts to drag them into the unfolding scandal.

Let us for a moment disregard the moot point of whether Acting President Yemi Osinbajo consulted with President Muhammadu Buhari before firing a key member of his cabal Lawal Daura.There are at least three, maybe four competing narratives of what transpired on Tuesday August 6, 2018 at the National Assembly, all of which cannot be true and none of which bodes well for President Buhari’s ability to govern Nigeria.

There is the Yemi Osinbajo Acting-Presidency narrative that the Presidency (at least his wing of it) was unaware of the attempted legislative coup and siege on the National Assembly. By this narrative, SSS boss Lawal Daura acted unilaterally and unconstitutionally and is the principal villain.

There is the Buhari cabal wing of the Presidency narrative which for obvious reasons will never be publicly vocalized. The un-vocalizable cabalist narrative holds that they (i.e. the cabal) were acting in the best interests of the President and in his name. They made the Presidentaware of the broad contours of their plans while keeping him in the dark about the dirty nitty-gritty. They advised the President to proceed on a 10-day vacation to London to protect his reputation as “Mr. Integrity”even though his expansionist policy would be the ultimate beneficiary of their success.

Someone, definitely not Lawal Daura, leaked their plans to Bukola Saraki and his PDP cohorts, who preempted the APC by arriving first at the National Assembly on the D-day. By this cabalist narrative, the Vice President even though he was deliberately kept in the dark, demonstrated rank disloyalty to the President by his precipitate action of sacking Lawal Daura without awaiting the President’s return to adjudicate the matter.

There is the APC narrative which holds that Lawal Daura is not a villain but a hero of democracy, who sent his operatives to the National Assembly to secure the premises, safe-guide lives and allow APC members to grant effect to their plans of impeaching the Senate President Bukola Saraki and his deputy Ike Ekweremadu in a “controlled” environment.

Finally, if multiple presidency sources as well as Bukola Saraki’s and Ike Ekweremadu’s fears are to be believed, there is the leaked Police Report narrative, which holds that Lawal Daura is a corrupt traitor who like his patron villain Judas Iscariot sold his kinsman and master President Muhammadu Buhari to his principal enemies Bukola Saraki and Ike Ekweremadu for 30 tonnes of silver (allowing for inflation).

These four narratives cannot all be simultaneously true. At least one, may be even more than one,is wrong. Which ones? You be the judge.

Igbo, Biafra and the burden of truth

9 thoughts on “Coup within a Coup”