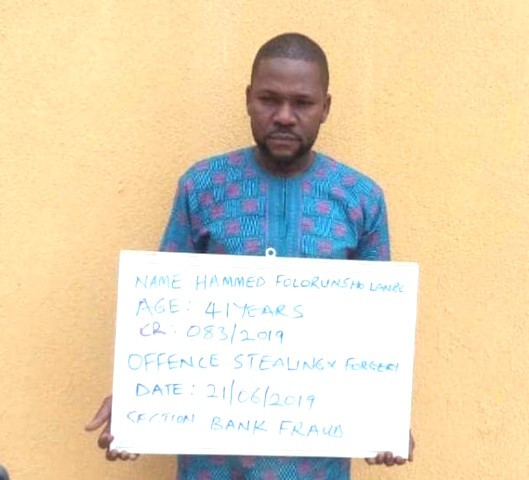 He was arraigned before Justice Mahmood Abdulgafar of Kwara State High sitting in Ilorin for offence bordering on stealing.

He was alleged to have illegally withdrawn the sum of N540,000 using the phone of his friend who had offered the phone to him to access Facebook. Lanre had accessed his friend’s phone and used it to withdraw the money.

Operatives of the EFCC, thereafter, located and arrested him in Lagos.

He was first arraigned on July 8, 2019 on a two-count charge to which he pleaded “not guilty”.

However, realizing the strength of the evidence gathered against him, he approached the EFCC for a plea bargain, which led to him being re-arraigned on an amended charge to which he pleaded “guilty”.

The amended charge reads: “That you, Folorunsho Lanre, sometimes around 29th, May 2019, at Ilorin, within the judicial division of the High Court, committed theft by taking dishonestly, money belonging to Hammed Muritala when you transferred the gross sum of N540,000 via his mobile phone, from Stanbic Ibtc into your bet9ja pay stack website account without his consent and thereby committed an offence contrary to Section 286 of the Penal Code Law and punishable under Section 287 of the Penal Code Law.”

Thereafter, Justice Abdulgafar sentenced him to one year in prison to commence from May 30, 2019.