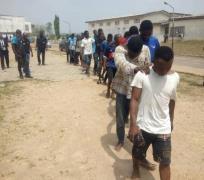 The management of Oduduwa University, Ipetumodu, Osun State has debunked the claim of some of the students arraigned in court by the police who said they are students of the institution.

The Osogbo magistrate court presided over by Magistrate Fatimoh Sodamade, yesterday remanded eight of the the accused persons in Ilesha prison in addition to eight already remanded in prison by Magistrate MA Awoldele.

“One would have expected that the media and police would have ascertained from the management of Oduduwa University, ipetumodu before publishing such damaging information about the university,” Dr. Moses Aiyeonipekun lamented.

12 thoughts on “Criminals accused of involving in armed robbery, cultism not our students – Oduduwa University”