Cristiano Ronaldo sent off after scoring in Madrid

Cristiano Ronaldo sent off after scoring in Madrid 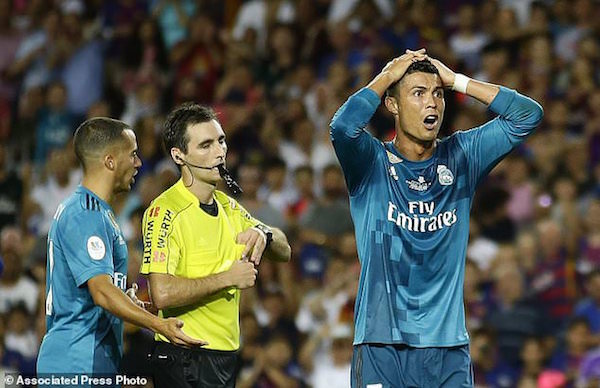 Cristiano Ronaldo was sent off after helping Real Madrid secure a 3-1 win at Barcelona in the first leg of the Spanish Super Cup on Sunday.

Ronaldo scored with a beautiful strike to make it 2-1 in the 80th minute and earned a yellow card for taking off his shirt to flex his muscles at Camp Nou.

Ronaldo will miss Wednesday’s second leg in Madrid after being booked again just two minutes after scoring for diving in the area.

Madrid went ahead in the 50th from an own-goal by Barcelona defender Gerard Pique.

Lionel Messi equalized for Barcelona in the 77th when he converted a penalty after Luis Suarez was fouled by goalkeeper Keylor Navas.

Marco Asensio got 10-man Madrid’s third goal in the 90th.

"I Have Nothing Against Christians", El-Rufai Cries Out as he begs for their votes