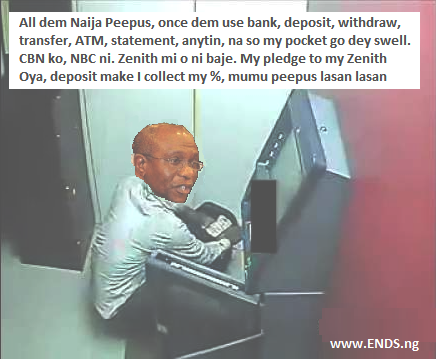 However, while the admission attempted to present the tape as being recordings from 2015/2016, the governor must have hoped Nigerians would miss the clear discussion of refunding the missing monies to hopeful sources in 2019, 3 years later! Below is the excerpt:

The heavily breathing Emefiele was mentioning attempting to call a certain a�?Mr Ayoa�? to bail him out. Perhaps this referenced Ayo Babatunde, CEO of Suntrust bank, or some other cabal crony the notorious apex bank governor enriches.

The governor in the recording appeared to be attempting to borrow billions to offset the budget gap with a promise to make it up in 2019 (to the private banks who could lend him) via exchange rate benefits.

The central bank governor has been branded #CrookedEmefiele for many reasons including his brazen practice of gifting private bank managers and other cabal billions of dollars via subsidized FOREX rates.

a�?I was just asking Mr Arowosegbe about their exchange-rate gain, the rate they used for this year they said is already 364 which is already very high. because if not if it were to be something lower, it would have increased that a��gain by 1 or 2 naira, that will change the whole thing.a�? Listen to tape Part 1 6.14mins: https://youtu.be/F0ssBqWIIqk

The mention of the exchange rate at 364 also exposes the falsehood in claiming the tape was referring to the 2015 state loans issue. In 2016 the Naira exchange rate was 300. It was set at 364 in 2018 which is when the tape was evidently recorded.

CBN in its press release defense of #CrookedEmefiele had claimed the governor does not have properties in Dubai. Another hopeless attempt at clearing the notorious governor.

Former CBN governor and now Emir Sanusi lamented that under Emefiele and the Buhari regime, the central bank was making billionaires wealthy everyday via FOREX subsidy gifts. The bank sells FOREX to the cabal at unbelievable rates which immediately transfers billions of naira from the nationa��s coffers to the private cabal. See: https://www.dailytrust.com.ng/fg-creating-billionaires-through-forex-sanusi.html

A perplexing report by Reuters in 2016 exposed how under his governance the CBN had transferred as much as 100 million naira to Aliko Dangote in subsidized FOREX gift in just 11 weeks reviewed. See: https://www.reuters.com/article/us-nigeria-forex-dangote-insight/africas-richest-man-got-a-fistful-of-dollars-in-nigerian-currency-squeeze-idUSKCN0Z90G5

Upon Emefielea��s retirement, he will waltz into the cabal offices and cash his cheques.

My recent article a�? Is Buhari Really Seeking a Second-Term for Crooked CBN Governor a�? described some of the many scams of #CrookedEmefiele whose demeanor in the recent tape is most shocking, hustler-like and horribly damaging to Nigeriaa��s image. The secret CBN reinstitution of COT rebranded as CAM fines on the masses allowing banks rob the poor of N1 per 1000 at the expiration of the similar COT fine in 2016 is one such example. Such a�?chancinga�? to feed the fat bank MDs is not done anywhere else in the whole wide world!

Also damning in the audio was the repetitive mentioning of the a�?oppositiona�? by the bank directors. What? Is the CENTRAL bank of Nigeria now a political party? The APC ruling party?

Nigeria is in big trouble! The chronic appointment of bankers and not financial experts from the citizenry, to head the apex bank, continues to keep Nigeria as a nation where the banks in suite with the Apex bank are set up to rob the nation and paupera��s coffers to feed the few wealthy vulturous cabal.

The opposite of Robbin Hood, a Hood Robber is at the helm of our apex bank. Unlike Robin Hood, this man steals from the poor to give the rich.

Luckily for him the day is not coming when the poor will have nothing left to eat than the rich because Nigeriaa��s poor are too broken to stand up.

Restructuring: The Perfect Panacea for Corruption

9 thoughts on “#CrookedEmefiele Admits To Scandalous Tape, Claiming It Was 2015 While Tape Referenced 2019”