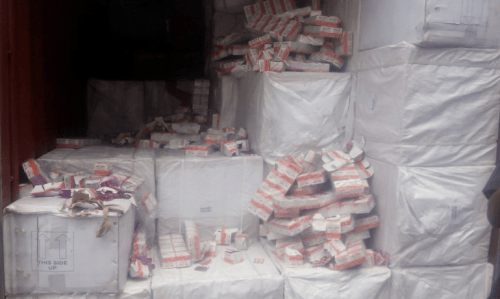 The Seme Area Command of the Nigeria Customs Service (NCS) has intercepted 782 packets and 630 cards of tramadol, all of 50 gram equivalent to 409,000 grams and 9,400 milligram of amphytamine syrup worth over N4.7 million.

Public Relations officer of the command, Husseni Abdulahi, said in statement on Monday that the seizures were made along Elejah – mowo axis of the command.

Abdullahi, said the seizures were recorded within the last three weeks as the new year began.

According to him, the seizures were as a result of strategic efforts “to suppress the activities of daredevil smugglers to the barest minimum,” noting that the command had intensified its anti-smuggling activities.

He said, “The anti-smuggling unit of Seme Area Command under the leadership of Chedi Dalha Wada, acting Area controller, has in the last three weeks recorded tremendous achievements. This is coming on the heels of the arrest of 782 packets and 630 cards of tramadol all of 50grms, equivalent to 409, 000grms of tramadol, and also 9, 400ml of Amphytamine syrup with DPV of N 4,740, 132.00 intercepted along Elejah – mowo axis of the command.

“In the same vein, a total DPV of N19, 418, 806 was realised during the period under review from the following seizures: 275 bags of rice (50Kg each); 9, 225 litres of Premium Motor Spirit (PMS); 11 Jerry cans of vegetable Oil (25 litres each); 132 cartons of frozen poultry products; 105 textile materials (six yards each); 12 sacks of used clothing; and one sack of used shoes. Others items are three sacks of used ladies hand bags; 326 pieces of cream; 10 sacks of Egusi; one sack of stock fish and 30 cartons of choko drink.

Banditry: Police Reveal How Herdsmen Use Cattle To Move Firearms

6 thoughts on “Customs seizes tramadol, other items worth N24.1m at Seme”