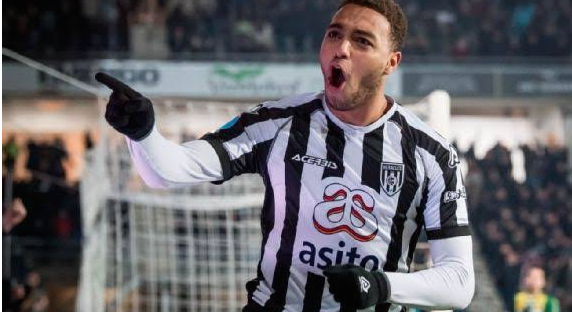 Heracles Almelo’ striker and new Super Eagles invitee, Cyriel Dessers, has let out his frustration about how the Dutch Eredivisie 2019/2020 season would go

Dessers is the joint top scorer with Feyenoord’s Steven Berghuis with 15 goals. Speaking to Het Nieuwsblad via voetbalprimeur, he said he’s not comfortable with the kind of history that would be attached to his name as the top scorer should the season not be completed.

“If the competition would stop now, I would be a top scorer, I know. I would be a quiz question forever, there would also be an asterisk forever after my name, because the season is not finished. That would be a shame.”

The Eredivisie has been suspended due to the pandemic and the 25-year old Beligan born attacker is worried with the way his name would go down in history if the season is not completed.

The Heracles Almelo’ hitman further explained that he refused to go back to Belgium during this period so as to reduce the risk of his family contracting the virus.

“I stayed with my girlfriend in Apeldoorn, to limit the risk for the family. Carnival is not as well celebrated here as in Brabant or Limburg and so the situation is not too bad,” he said.