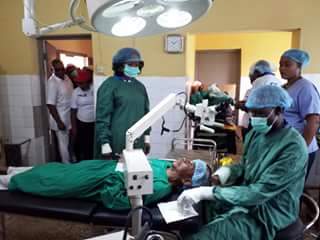 Moved by passion, the wife of the Delta State governor, Dame Edith Okowa, has aligned with her husband governor to bring a�?Prosperity For All Deltansa��, as she stormed Umunude general hospital, Ika North East council area with her pet project, 05 Initiative on free medical treatment.

As early as 7:00am, the people had already converged at the hospital premises with high expectations that were met just as the chairman of the council, Victor Ebonka, alongside his team had already briefed his people on benefits of the free health programme.

As usual in all her functions, the governora��s wife was all smiles as she stepped into the premises with a welcoming ovation from the people who incidentally are from her local government area.

In her speech which was punctuated with Ika and English languages the governora��s wife explained the need for people to have good health as it is essential for good productivity and contributing to the growth and the general economy of the Nigerian state.

Specifically, she poured encomiums on Dr. Ugbedi, whom she said approached her office requesting to offer the services of his organization, Restore Sight Africa Initiative, for the good of the people of Delta state. She said Ugbedi promised to use his equipment and knowledge to add value to the living conditions of the people.

For her, it was a great venture and a laudable one. Following that, she called on people to use their knowledge and privileged positions to enrich peoplea��s lives and do Goda��s work. Besides doing Goda��s work, they should apply their knowledge to make the world a more livable place for all.

Dr. Ernest Ugbedi, who volunteered the services of his organization to assist the poor, told the people that Okowaa��s wife has the interest of the less privileged, the sick and the downtrodden at heart, hence she has taken it upon herself to seek and promote their welfare as much as she could.

He announced that over 40,000 people are blind in Delta state but 20,000 have cataract, which is partial blindness. The pathetic aspect of his speech is that women are more vulnerable to this challenge, reason, according to him, is that women care more for their family members than men.

He particularly said women give up their comfort for the welfare of other members of the family; consequently women have more of health challenges than the men in the family. He said blind people are cut off from every aspect of society life as they cannot go to the market, church or participate in any activity in the home. They become burden to other members of the immediate family.

He said most rural dwellers do not have access to medical families which are mainly concentrated in the urban centres. Hence, it becomes a challenge for the sick in the rural areas to access health facilities to help prolong their lives.

The Delta state Commissioner for health, Dr. Mordi Ononye, told the crowd that Delta state Governor Ifeanyi Okowa loves the people of the state. He said the governor is interested in the welfare of all, hence he has created avenue for all to achieve their goals in life.

He went prophetic saying those who have failing eyesight will receive their sight after the meeting with the specialist doctors who volunteered to join in making life good for the people. He specifically told the people that the general hospital will receive a facelift within the next three weeks, adding that Governor Okowa does everything to make sure every Deltan is happy.

The Ika North East local government chairman, Mr Ebonka, who was excited over the event starting from his council area, said the free health services which is being carried out by O5 Initiative Grassroots Outreach was in collaboration with other agencies as the state primary health care development agency.

He said the collaboration was because the governora��s wife has good plans for the people of Delta state. He said the free health services will bring succor to the people, especially the less privileged in the rural settlements.

The event which was the flag off and billed to be taken to all the 25 local government areas of the state will end in Asaba after all the council areas have been visited. Medical team was on ground to meet all the health needs of the people.

Beneficiaries of the programme gave sterling testimonies to the good things they are bound to gain from the free health services. Mrs. Caroline Kadi, Mrs. Maria Egom and Mr. Sunday Ikechukwu expressed satisfaction.

The three individuals who had eye challenges appreciated the programme and the good initiative of Dame Edith Okowa, just as they called for the continuity of the programme so as to help the people of the rural dwellers.