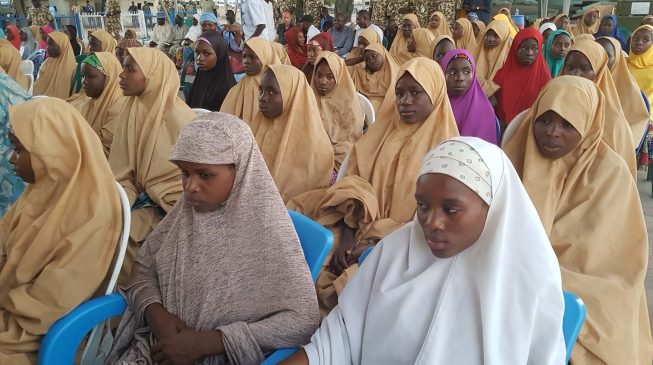 It is no longer news that 104 girls were released to the federal government of Nigeria after being abducted from their school in Dapchi, Yobe state. Wild jubilation was felt across the nation on the news of their release but shrouded beneath lies an eerie scepticism. Certain questions beckon when you get to watch the film depicting their return; the brazenness of the Boko Haram insurgents who returned the girls and the seeming connivance of the locals during the return of the schoolgirls making case for this scepticism.

The abduction portends a ploy or as used in chess, a pawn; something that will assume a regular occurance, if not nipped at the bud. These insurgents have considered the federal government as an ATM (Any Time Money) machine and any time they need money, the sure way of constraining the federal government to do their whims and caprices is to abduct a large number of girls. It happened before and it is happening again, the difference now is that the alleged chief kidnapper now is Al Barnawi, the son of Yusuf Mohammed, the founder of the sect where as that of Chibok was the ruthless and deadly Abubakar Shekau, the second in command while Yusuf Mohammed was alive; a tough nut to crack.

Since their abduction, one wonders how and where the abductors were able to hide these schoolgirls that the security agencies of the country are unable to locate and get them released, save through negotiations with these terrorists. It is a shame that this is happening in a time the Nigerian Army claimed that it has completely defeated the Boko Haram insurgents. According to Maj.-Gen Nicholas Rogers, the theatre commander of Operation Lafiya Dole, a�?We have broken the heart and soul of Shekaua��s group, taking over the camp and its environs.They are on the run and we are pursuing them to wherever they go. This time around there is no place for escape anywhere. We had earlier asked those of them that want to surrender to do so and we are still asking them to come out and surrender otherwise they are going to meet it the hard waya�?. Words full of menace yet signifying nothing.

If about 105 students went missing in the aftermath of Boko Haram invasion of the Government Girlsa�� Science Technical College, Dapchi, Yobe State in February 2018 and “over 276 girls were kidnapped in April 2014 from their school dormitory in Chibok. Although 57 girls escaped, 21 girls were released in October and now a further 82 girls are free, it’s important to remember that over 100 girls are still missing” and 1 Dapchi girl, Leah Sharibu, the only Christian among them, is still held after 5 died, for it was argued that the original number of the abducted was 110 (as at the time of publication, 2 more persons have been released, making the count 106). These releases were all done after lengthy negotiations between Boko Haram terrorists and the federal government, which on most times, include exchange of these girls for some filthy lucre and Boko Haram suspects held by the authorities. One wonders how these negotiations are effected in terms of ransom payment and releases of Boko Haram suspects (even though the federal government claims that the Dapchi release is unconditional – no swap and no ransom paid, says Lai Mohammed). Who are those these girls are released from? One hopes one is not missing something? Can’t these Boko Haram negotiators be tracked or forced to divulge where their leaders and members are? The whole stuff looks like a circle of lunacy of providing the same solution when faced with the same problem and expecting a different result.

Again, Chief Femi Fani Kayode would add some pertinent questions following the release of 104 Dapchi school girls, calling for answers: “For example how do you explain the Ghana Must Go bags that the girls were carrying on their return? Did they go shopping in Sambisa Forest? Or is it that when they abducted them they gave them time to pack all their clothes and allowed them to bring them back when freed?

“Another question that needs to be answered is this: why did the Federal Government lie to the international media that the girls were dropped off in Dapchi at 3.00am in the morning when the footage and pictures prove of their return prove that the whole thing was done in broad daylight.

“Finally why did the government inflate the number of the girls that were abducted when the kidnapping took place six weeks ago. They claimed that 110 girls were missing after which the school and the parents set the record straight and said that 105 girls were kidnapped and not 110.

“Could it be that they knew that in order to make their story more credible after money had changed hands and the girls were returned they had to be able to say that at least 5 of the girls died whilst in captivity without having to actially kill any of them?

“This seems to me to be the only plausible reason for telling this lie and sticking to it to the end even though it had been exposed for what it was from the outset by the parents of the girls and the school authorities.

“Finally why are the government telling the whole world more lies by saying that no ransom was paid in return for the girls?”

Governor Ayodele Fayose raised same doubts and asked some questions too. He tweeted from his official Twitter account, @GovAyoFayose: “I congratulate parents of the abducted Dapchi Girls that were returned today & sympathize with parents of those who reportedly died.The abduction of the girls is an indictment on the FG & their release is no doubt a drama scripted by the govt and its agents to swindle Nigerians.

“Is it not strange that the girls could be brought back to Dapchi by their abductors without the security agents knowing when they were returned and who returned them?

“Should we say that the same spirit who made sure that all military checkpoints in Dapchi and other surrounding towns were removed to pave way for abduction of the girls also made sure that the girls were returned without any security agent seeing them?

“One can only be hopeful that the real script writers behind this national drama will be exposed one day.

“Interestingly, no one was questioned up till now despite conflicting claims by the army and police as well as the damning report by the Amnesty International that between 2pm & 6pm on Feb 19, 2018, calls were made to tell the security services that the insurgents were in Dapchi.”

Even the opposition party, Peoples’ Democratic Party (PDP) has been skeptical about the whole affairs all this while, it wrote in a statement: a�?There is no evidence that the Boko Haram insurgents or any militant group abducted the schoolgirls in the first place. Rather, what is evident to all is the high-level official manipulation of security movements in Dapchi both in the staged abduction and the returning of the traumatised schoolgirls.

a�?It is instructive to note that till date, no report has been presented by the National Security Adviser (NSA), who has been charged by President Muhammadu Buhari with the investigation of the abduction. This is in addition to deliberate efforts by the government to suppress the free flow of information around the abduction.a�?

Questions raised so far paint a picture of shenanigans being played, which is an insult to the intelligence of many Nigerians. This ‘rough play’ should be brought to an end. Nigerians will no longer entertain this kind of play. The federal government for the last time should curb the excesses of this terror sect rather than greasing their wheels and cuddling them, these intransigent renegades will only persist in kidnapping more female students. Negotiations with terrorists should not be espoused; intelligent and proactive attacks on these terrorists are the best means to ending this terrorism. As 2019 election is fast approaching, it is wise and apt for the federal government to invest all of its resources in fighting these terrorists and one believes that the federal government will get it right this last time, putting an end to this arrant nonsense – Boko Haram menace.

False Solutions In Some Christian Churches

Time for a paradigm shift in the north