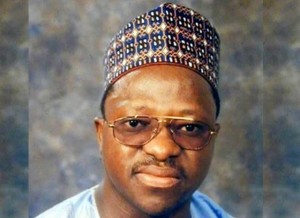 It was at the time the Plateau State governor, Joshua Dariye was fighting the political battle of his life.

Between late 2005 and mid 2006, Dariye’s profile as Mr. Nice Guy had crashed and he saw himself in the center of thick plot that later consumed him.

He was being investigated by the EFCC, impeachment threat was dangling over his head and then President Olusegun Obasanjo had made it clear that he did not want the Mushere born politician in office a day longer and withdrew his security.

Then deputy senate president, Ibrahim Mantu was eyeing his seat, some members of his house of Assembly were being detained by the anti graft agency and his deputy was being wooed to implicate him.

The ground Dariye was standing on seemed to be caving in and the governor realized he had nowhere to run to and in a fit of anger, exploded by stating publicly how he misappropriated the N1.1 billion ecological fund meant for the state.

The governor who was visibly angry, described the investigation by the EFCC operatives into the affairs of the Plateau state House of Assembly as harassment saying it will be the last time the EFCC officials would harass any body in the state.

Describing the EFFC operatives as “Obasanjo’s dogs”, the governor who was addressing a civil coalition group at the then Government House in Rayfield, Jos, said the EFCC should know that he, as an indigene of Plateau State and had the capacity to contain them.

His words: “They should know that I am a Plateau man and that in Plateau, the Ngas, the Tarohs and the Musheres eat dogs, so we have the capacity to deal with any stray dog.”

The governor said he is not at all worried by the charges of graft agaisnt him as he did some of the things he was alleged to have done due to “instructions from above.”

He said specifically, that the N1.1 billion Ecological fund which he was being accused of siphoning, was spent according to “orders from above” where he said he gave about N66 million for obasanjo’s campaign, N100 million to the South-west PDP, N100 million to the North-east PDP and another N10 million to Senator Ibrahim Mantu.

The governor said if the resolve is that he should return the money, then all those who had collected the money should equally return their shares while the accusations on his person should stop.

From that moment, even if the former governor had intended to wriggle out of the allegations against him, he lost his case as he allowed his emotions to get the better of him and confessed to sharing ecological funds meant for the state.

Dariye’s successor, Jonah Jang, on assumption of office also tried to get Dariye, who many times frustrated his chances of becoming a governor.

Jang wasted no time in taking measures to address the matter by asking banks not to honour financial requests from the Joshua Dariye government after he (Jang) was declared winner of the 2007 elections and was still governor-in- waiting.

On assumption of office, Jang set up a judicial commission of inquiry into award of contracts between 1999-2007 in Plateau State, which implied that his angst was only with the period covered by his predecessor; Dariye.

On the second day of public hearing, the commission, headed by Justice Morenikeji Onalaja was told that Dariye and his commissioner of finance, gave approval for the deduction of over N30.069 billion for payment of fictitious contracts when he was governor.

But as the hearing commenced, Dariye went to court questioning the legitimacy of the powers given the commission.

He asked the court to interpret the laws and decide if Jang had the powers to set up a judicial commission of Inquiry giving it powers to prosecute, arrest, and sentence all at once, saying, in his understanding, only the courts can do that.

Dariye said if Jang is not checked, he may go ahead in future to use a similar instrument to get at those who do not agree with him politically as he would be under the illusion that he has such powers, unless the court says so.

Dariye got judgment in his favour and the commission stopped further hearing.

He was saved from immediate humiliation but the case instituted against him by the EFC continued in court.

But today, 11 years after leaving office as governor and after winning elections to the Senate for two consecutive times, he has been found guilty of the charges of misappropriating the ecological funds meant for his state with the evidence he provided while reacting in anger.

519 thoughts on “Dariye: How anger threw him in jail written by Andrew Agbese”