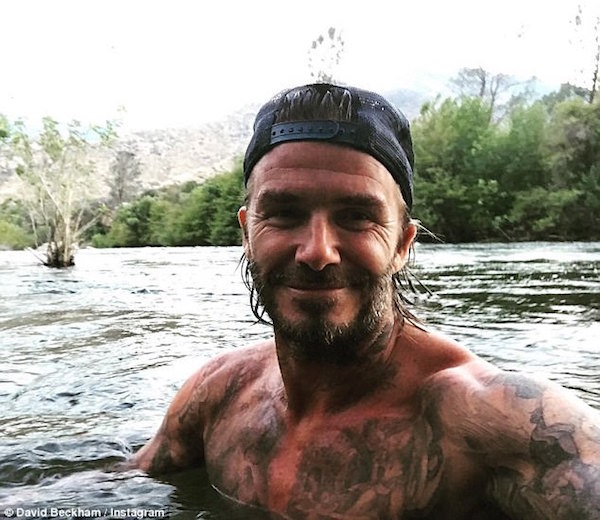 David Beckham shared a cheeky moment with one lucky female fan in California – signing his name onto her bum.

The footballing icon, 42, took a pit stop on his American motorcycle tour to squiggle his autograph on the denim hotpants of an inked admirer.

Perched coolly on the side of his bike, Becks smiled as he left his mark on the Daisy Dukes.

Looking typically cool, he wore a cap back to front and a black vest to show off his tattooed arms.

On the road with his pal, the pair were more than happy to have pictures with fans after pulling up outside a hardware store in Kernville. 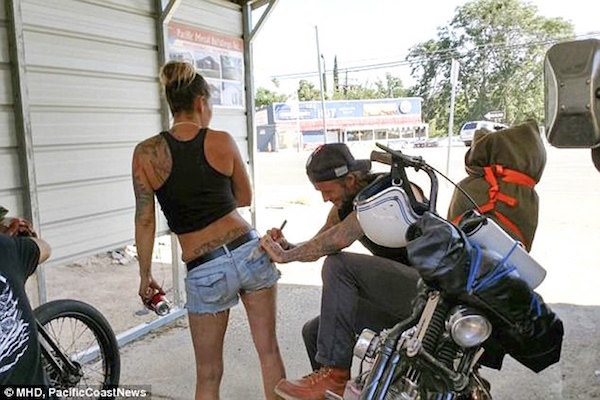 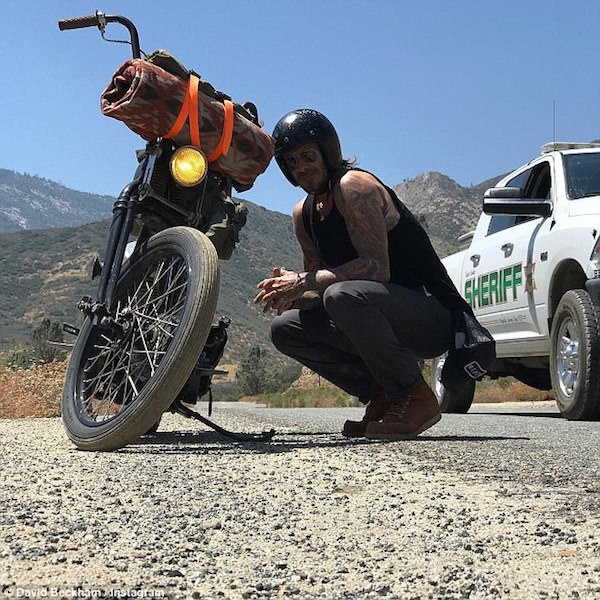 Meanwhile, David and wife Victoria made sure they put on a united front in LA yesterday, following rumours of a breakdown in their relationship.

The couple – who have been married for 18 years – were spotted taking their kids out for ice cream during a family day out.

David looked in high spirits as he chatted with Brooklyn, Harper, Romeo and Cruz, while Victoria pulled her trademark pout.

Walking slightly ahead of the group, fashion designer Victoria showed off her slim figure wearing a pair of skinny jeans, an AC DC T-shirt and a cap pulled down over her face.

Her husband looked as cool as ever in a straw hat, white T-shirt and jeans. 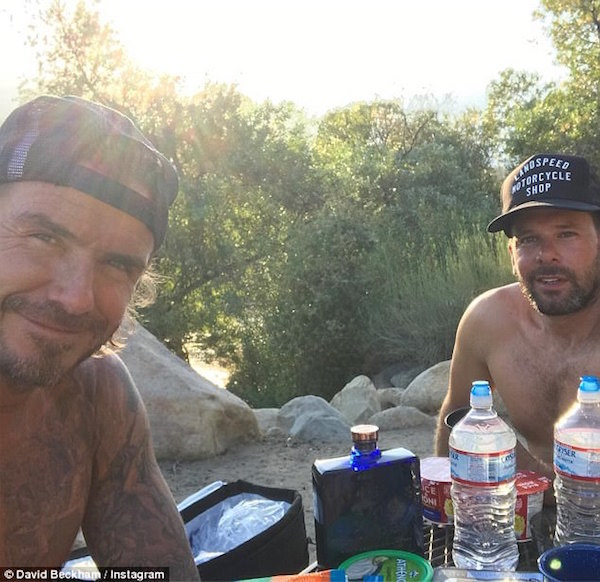 Brooklyn – who recently went public with new girl Madison Beer – looked in a very jovial mood and was seen giving his dad a hug as the family spent quality time together.

David had some rather choice words for Victoria recently after she gleefully shared a video of him channelling his inner Indiana Jones at a gymnastics centre.

The former Spice Girl couldn’t resist posting the funny Instagram video of David swinging on and climbing over apparatus, wearing a cowboy hat, as the Indiana Jones theme music played in the background.

Vic shared the video with the caption: “Spider-Man didn’t work out but there’s always Indiana Jones!”

Hundreds of fans left comments giggling about the funny clip – but not everyone was thrilled.

Eagle-eyed social media users noticed that Becks himself left his own comment buried among the others, which read: “K**b @VictoriaBeckham. Oh, I will get you back for this.”

The Beckhams’ outing comes amid reports that he and wife Victoria are essentially leading ‘separate’ lives.

The A-list couple’s marriage is reportedly going through a rough patch and now the pair reportedly have separate living areas.

The Daily Mail reports that their £5million country farmhouse has “two distinct living quarters – of equal size – each with their own kitchen, bedrooms and a courtyard”.

Their massive mansion has been “created from three barns” and the property is so big that “a huge party could go on in one part of the house and guests in the other wing 50 yards away would be none the wiser”.